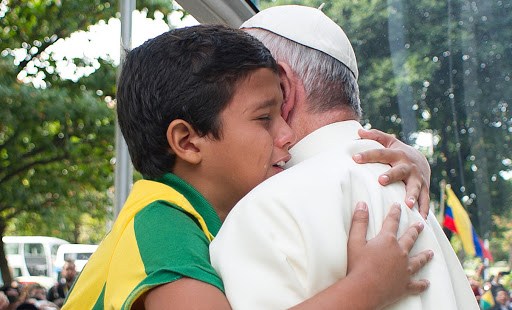 Nathan de Brito brought Pope Francis to tears during one of his motorcades through the streets of Rio de Janeiro on Friday, when he broke past barriers to deliver an important message to the Pontiff.
“Your Holiness, I want to be a priest of Christ, a representative of Christ,” de Brito whispered in the ear of Pope Francis July 26, after jumping hurdles and making his way to the Popemobile in his Brazilian national soccer team jersey.
“I am going to pray for you, but I ask you to pray for me,” Pope Francis responded, moved to tears and embracing him.
“As of today, your vocation is set.”
Onlookers noticed that de Brito did not want to leave the Holy Father. It was only after several attempts that the Pope's security entourage was able to take him off the Popemobile.
Once on the street, Nathan walked along side the Popemobile, waving to the Pontiff and blowing him kisses. One of the security guards stopped to console the boy before bringing him back to his waiting family.

Originally published at Catholic News Agency on 30 July 2013.  Used by permission, all other rights reserved.