We Must Have Solidarity with the Poor 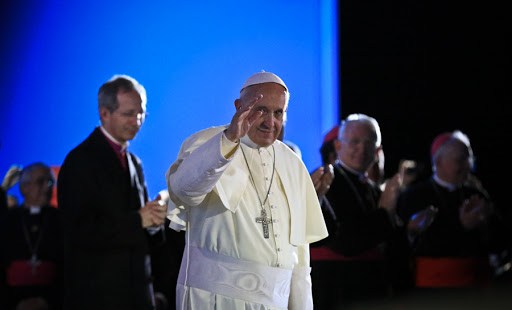 The Pope at WYD: “[O]nly when we are able to share do we truly become rich… The measure of the greatness of a society is found in the way it treats those most in need, those who have nothing apart from their poverty.”

The very last word of Pope Francis’s farewell address was “solidarity.”  Indeed, this was one of the great themes of the Pope’s meeting with the young people of the world.

At St. Francis of Assisi of the Providence of God Hospital, the Pope said, “To embrace, to embrace – we all have to learn to embrace the one in need, as St. Francis did.” This is a privileged way of embracing the suffering body of Christ, which brings light to the one offering help and exhortation, as the leper embraced by St. Francis was a “mediator of light” for him. To the poor community of Varginha, Pope Francis urged all his listeners to aim for solidarity in their lives, which is the path to real wealth and greatness.  “[O]nly when we are able to share do we truly become rich; everything that is shared is multiplied. … The measure of the greatness of a society is found in the way it treats those most in need, those who have nothing apart from their poverty.”

To be in solidarity is to make sure the elderly are treated well and consulted as sources of wisdom.  Real solidarity opposes the culture of rejection, especially of the old and the child. (This is surely an implicit reference to the evils of euthanasia and abortion). Solidarity also moves a society to assure work for its young people.  The Pope laments the fact that so many young people throughout the world lack sufficient work to support themselves and to contribute to the common good.  Also contributing to solidarity would be the rehabilitation of politics.  To representatives of the leading classes of Brazil, Pope Francis said, “to rehabilitate politics … is one of the highest forms of charity.”

Pope Francis’s message is not the social gospel without the faith.  He movingly exhorts young people to hold on to their faith without diluting it in any way, urging them to be joyful disciples and missionaries in the world, able and willing to embrace the cross of Christ for the sake of love.  In the prayer vigil on July 27, the Pope urged young people to be “Christ’s athletes,” to build up the Church of Christ, and to show people how joyful it is to live the beautiful Christian faith.

The well-being of the family is another recurring theme in the Pope’s speeches.  At the recitation of the Angelus on July 26, the Holy Father spoke about the importance of grandparents for family life, “for passing on the human and religious heritage which is so essential for each and every society.”

Taken all together, these speeches reveal a Pope in love with Christ and full of love for all human beings.  He longs to bring the truth of the Christian faith to peoples and desires that solidarity be embraced in every country of the world.