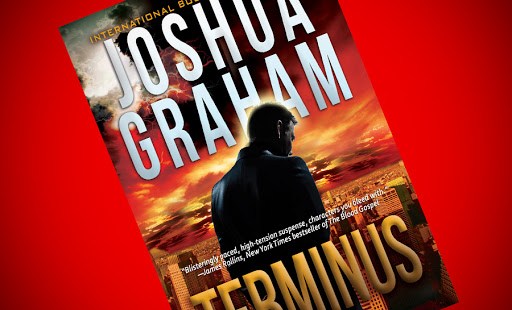 Anyone raised on Harry Potter will love the thrillers and fantasy sagas by Joshua Graham.

There is magic, like Tolkien; fantasy characters in a new world, like Suzanne Collins; and best of all – our world and supernatural places co-exisiting together. It's as if J. K. Rowling and C. S. Lewis teamed up together after a celestial chat at a coffee bar.

Beyond Justice and Terminus are thrillers that lead readers to think about the ultimate meaning of life. His epic fantasy, Once We Were Kings (written for his six-year-old son), is a book that pulls teens away from video games and smart phones. I had the remarkable opportunity to interview Joshua Graham about his books. Here are his answers in response to questions posed:

Please describe your background and the events in your life that have nurtured your faith.

I grew up in Brooklyn, NY and was raised in a family in which our faith was central. Though I didn’t really make a personal decision to become a Christian until I was in college, I was always a believer. My father was the founder of our church, and has traveled the world preaching the good news. He was a strong influence on my knowledge of the Scriptures, but more than that, he has been an example of what it means to have faith, and to dream big.

What are some of your favorite themes in the Bible?

The most powerful themes in the Bible for me are those of grace, redemption, sacrifice, unconditional love, destiny, and purpose. My life verse is Ephesians 2:10.

I see many similarities between Terminus and The Screwtape Letters. Would you care to comment?

C.S. Lewis had an extraordinary gift for taking concepts cosmic in scope and simplifying them into easily relatable ideas and stories. The Screwtape Letters is just one example of this (as is The Chronicles of Narnia). Knowing that there is a conflict over the mind and soul in the spiritual realms – as Screwtape depicts – helps me understand much of what I do, and that with which I struggle. Jesus had a similar ability to condense spiritual concepts into parables that are timeless and life-changing. If I can in any way do the same at a fraction of the magnitude that Christ and Lewis did, I will consider myself a success.

How do you manage to reach that “sweet spot” point of balance in a thriller where there is enough “action” but not details of sex or violence that might be overly titillating, or even offensive?

I’m a Christian, but I’m not dead. :) There’s plenty of sex and violence in the Bible, so it’s not something that I can’t handle reading about. In real life, people commit violent acts, and they have sex. I don’t try too hard to avoid it, if it really serves my story, but on the other hand, I try to handle it tastefully (usually by implication, or having it understood to have happened off-stage.) Look, we know that our parents had sex – we are living proof of it. We just don’t want to know all the vivid details of it, right? That’s my approach in writing. I also don’t want to glorify sex or violence for its own sake. That’s a different genre, and readers of that know where to find that.

A thriller will often include the violence perpetrated by violent people. I don’t think it’s that much of a challenge for me to write scenes that require it. It’s actually quite natural to the story. If we can handle the Old Testament, we can certainly handle what happens in thrillers.

Why do so few works of Christian fiction not end up as bestsellers?

If any of your books could be made into a movie, which would you choose and what would be your reasons for choosing?

All of them, obviously! Seriously, though, my mind is very cinematic and many of my readers who have never met each other say that they can see my book playing out like a movie.

C. S. Lewis appears to be a bridge between Catholics and Protestants – in fact, Pope John Paul II mentions him frequently, and Joseph Ratzinger gives information about his thinking, as well a footnote, on the first page of “Jesus of Nazareth” – any thoughts on this?

I am glad that this is the case. The truth is that Catholics and Protestants believe in the same Christ, so why should there have been such conflict between them? I think when conflicts arise, one must examine the true reasons for them. They are usually over something man-made, because if we take the doctrine straight from the Bible, and from the life and teachings of Christ, we’ll see an overwhelming commonality and need for unity in the Body. Any fighting or disputes are not from above, in my opinion, but rather, through fallen human thinking. I always think about how Jesus regarded the “religious” leaders of his time, and pray I do not become like one of those Pharisees.

On a positive note, I’m very pleased that these gaps can be bridged, and I certainly hope I too can be part of this. When I was working on my doctorate at Johns Hopkins University, I attended a Jesuit church for a while and took spiritual direction from the pastor there. It was really enlightening and enriched my experience as a believer, even though as a “Protestant,” I had never attended a Catholic church prior. In his first sermon as the new priest of that parish, he actually praised the work of Billy Graham, which my friend who attended that church informed me was “a big deal.”

I’m all for breaking down dividing walls.

Any other thoughts, books you are working on, etc.?

I’m grateful for this opportunity to share about my writing and my faith. Good fiction is good fiction, in my opinion. Of course, we should be discerning in what we input into our minds, but we should also be prayerfully open to things that might take us out of our comfort zone. After all, Christ challenged the status quo all the time. In Matthew 5:21-48 (The Sermon on the Mount), he challenges many of the religious ideas of the faith with the phrase: “You have heard that it was said to those of old…” and he goes on to explain that even the standards of the Ten Commandments are not even close to God’s standards of righteousness (i.e., it’s not enough just not to murder, but to be angry with a brother without cause is an equal sin, and not enough to not commit adultery, but looking at someone with lust is an equal sin – that of committing adultery in the heart).

By Christ’s own words, none of my “religious” deeds will ever be enough to make me righteous before God’s eyes. And that is precisely why Jesus came to into the world: to be the sacrificial lamb for all of us, so that we can be made righteous by his blameless blood as an atonement for our sin. Knowing that it was by his grace that I am saved should humble me never to think that my “righteousness” is something that makes me superior to someone else. For in fact, I have no righteousness other than that which Christ purchased for me at a dear cost.

With that in mind, shouldn’t we all seek unity as fellow recipients of such lavish mercy and grace? Thankfully, this is happening now, even as we speak. Grateful and humble people who love God are coming together in unity, putting aside petty human differences in the light of this awesome grace by which we have been redeemed.

That excites me, and I hope it catches on throughout this world.

I hope this interview will encourage Catholics to read your books.

Thank you, Joshua Graham, for conversing with our Aleteia readers.