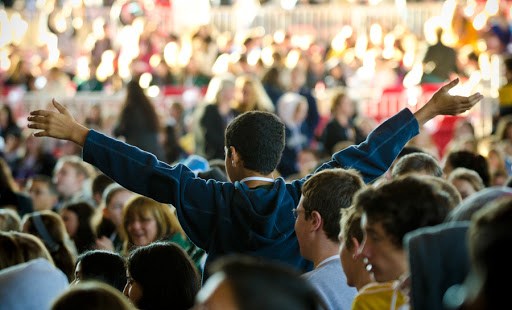 Bishop Jeffrey Monforton of the Diocese of Steubenville tells 2,000 teens, “You are heroes… You can do the Lord’s work and undo what has been done by many.”

Bishop Jeffrey Monforton of the Diocese of Steubenville told almost 2,000 teens at a summer youth conference at the Franciscan University of Steubenville that in some respects his generation had failed the Church, and it is up to them to do the Lord’s work, according to a University press release.

“You are heroes,” he said. “I’m part of a generation in which we have dropped the ball at times. You can do the Lord’s work, and undo what has been done by many. Remember: It may be that you and I are the only Bible that our brothers and sisters read.”

Even after a weekend of talks, Mass, praise and worship, opportunities for confession, and Eucharistic adoration, the response from the teens surprised everyone as about 100 young men and 200 young women walked up to the front of the fieldhouse at the faithful Catholic college to show their willingness to discern a religious vocation.

That scene was especially exciting for Father Chris Martin, the vocations director for the Archdiocese of St. Louis, who recalled an earlier Steubenville conference.

“I was a teen at this conference in 1996. It was one of those moments that butterflies came into my stomach because I knew that I might be one of those guys,” said Father Martin. “The funny part was that I was there with my girlfriend, and when they asked about the ladies she stood up. And in God’s Providence, about 10 years later I was ordained, and that same day she married another guy from our youth group.”

He asked the teens to pray about their vocation. “All of us are called to heroic love, we’re all called to be saints, we’re all called to transform the world,” he said. “But we also know that in every age, as part of His response to sin and to darkness, that God has called some men to be conformed in His image in a very specific and real way.”

Sister Miriam James, SOLT, implored the teens to be open to the beauty of a vocation. “The religious life of the beautiful sisters that you see before you—what you see in their beauty and joy, is a sign of eternity in their life given to Christ as brides,” she said. “This beauty is what transforms the world.”

One young woman, Katie Dowdy, of Gill, Massachusetts, said she had difficulty accepting that God wanted her to consider a vocation. “I felt the urge to go up when they had the vocations call, but I was so scared,” she said. “Since then, what’s changed is that I’ve felt the prayers of all the other people at the conference. Right now, I could still be a mom, or I could be a nun, or I could do anything.”

She added, “I don’t know what God’s calling me to, but I’m trying to stay open and to trust God.”