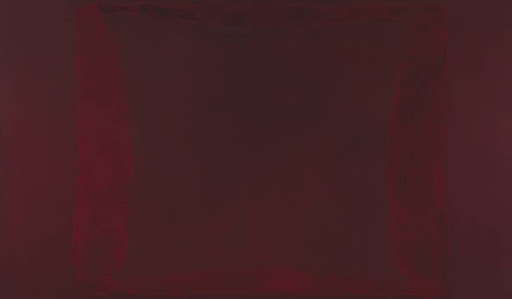 This piece is by the very famous abstract artist Mark Rothko.  He believed that figurative art no longer had the ability to connect the masses with the human tragedy particularly of the 20th century.  In light of the mass ethnic cleansing of the second world war and the subsequent wars witnessed by the whole world the imagery of the art of the past could not express the unspeakable pain we had to deal with as a species.  In his eyes modern society had become numb to such atrocities and sought to overcome them by submerging itself in uncontained consumerism, the average person of the West distracted him or herself by pursuing a relentless satisfaction of the sensual appetites on a daily basis.

While ignoring his misunderstanding of the art of the past, one could nevertheless fail to agree that society had lost its empathy with the suffering of the world, indeed, he hit the nail on the head with his revulsion of rampant consumerism.  His answer was to create an entirely new visual language that would awaken the deepest ‘feeling’ of the human person, directing the mind away from a self-satisfying decadent morality.  Even in the modern art world he was targeting what he saw as the indulgent and ‘empty’ Pop Art, executed by the likes of David Hockney and Andy Warhol, pulling the viewer into the reality of the human tragedy.

If one were to read his intentions before viewing his work then it could perhaps be argued that works like the one below indeed contained a latent sobriety, even perhaps an examination of conscience.   However, if we had not discussed this point before considering the image in front of us then one could read absolutely anything into the work – perhaps a darkening sunset?  The point is that the work is wholly subjective, a bit like the ink blot exercise in a psychiatrist’s office where the patient is asked “what do you see?”  Furthermore, even given that the viewer comprehends the artist’s intentions one should ask “is it enough to focus on the negativity of the human condition.  In his Letter to Artists (paragraph 11), John Paul II referred to the Second Vatican Council document, Gaudium et Spes and stated that the world in which we live “needs beauty in order not to sink into despair” and that the artist has a responsibility to contribute to the life and renewal of a people by enthusing us and raising us up.

The problem with the subtle reds on Rothko’s work is twofold.  Firstly he failed to create a universally recognised visual language contained within it that can respond to John Paul II’s call to contribute to the common good, its subjective nature cannot convey Rothko’s intentions.  Secondly, even if the viewer understands his intention the work offers no hope or sense of raising us up to either the eternal or even to simple action, but keeps the viewer rooted into the despair of the moment.  Indeed, the hopelessness that Rothko sank into sadly ended with him taking his own life.