Pope Francis Calls Faithful to Deeper Encounters with Others 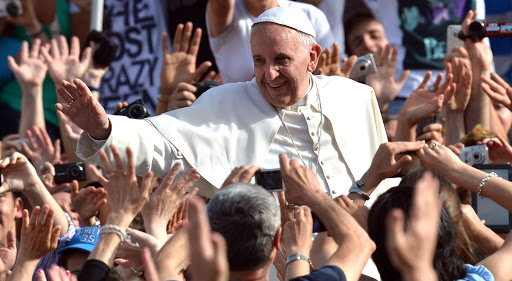 In an unprecedented interview with Brazilian TV network, the Holy Father stresses the importance of the Church’s contact with her people

In an interview with the O Globo TV network before leaving Brazil, Pope Francis emphasized the “culture of encounter” that must characterize the Church.

The interview, which O Globo called historic, was taped at the Sumare House, where the Archbishop of Rio lives and where Pope Francis stayed during his visit to Brazil. It aired on Sunday evening after the Pontiff had departed for Rome.

The Pope described the “warm welcome” that he had received in the country, saying that the “Brazilian people have a big heart.”

Discussing the security situation during his visit to Brazil, the Pope said that he was “not afraid,” trusting that when it is his turn to die, “whatever happens will be what God allows.”

He explained that it was his desire to be close to the people that led him to request changes in transportation, from a bullet-proof vehicle to one that would allow him better access to those in the streets.

“When you go to see someone, you don’t do so from inside a glass box,” he said, adding that he was grateful to the Vatican and Brazilian security team for their work.

Pope Francis also spoke about the role of priests, who are called to serve their people humbly.

“For me it is essential that the Church be close,” he said.“The Church is mother. Neither you nor I can know a mother who communicates through letters.”

He also addressed the need “to bear witness to a certain simplicity, even poverty,” saying that it offends the people when “those of us in the consecrated life are attached to money.”

Regarding various scandals at the Vatican, the Holy Father stressed that the Roman Curia contains “many holy cardinals, bishops, priests and lay people” who are “people of God who love the Church.”

However, “a tree that falls makes more noise than a forest that grows,” he explained, adding that those who commit crimes – such as illegally funneling money across national borders – should be punished, and reform instituted.

Also on the topic of reform, the Pope said that the eight cardinals appointed to help with the renewal of the Curia have already made serious proposals.

“The Church is always in need of reform,” he said. “There are things that were useful in other eras and that now are no longer useful and must be adjusted.”

During the interview, Pope Francis also denounced the “ferocious idolatry of money” that exists throughout the world today. Warning against “inhumane humanism,” he cautioned against falling “into the globalization of indifference.”

Today, the Pope lamented, a worldwide economic policy without ethics neglects the two extremes of society – young people and the elderly.

He called the unemployment rate among young people in Europe “alarming.” On the topic of youth protests in Brazil, he said, “I don’t like a young person who doesn’t protest,” while adding that the youth should be listened to and cared for so they are not manipulated.

Asked about interactions with other religions, the Holy Father said it was important “to foster a culture of encounter throughout the world.”

“Egoism must be pruned,” he explained, and people of all faiths should be concerned about taking care of the hungry and need.

People of faith “cannot sleep in peace knowing that there is one child dying of hunger,” he stressed. “We are going to be judged by our works of mercy.”

Originally published at Catholic News Agency on 1 August 2013.  Used by permission, all other rights reserved.