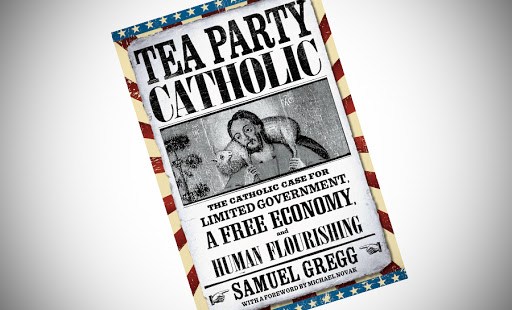 In this excerpt, the author of the new book ‘Tea Party Catholic’ looks at the key moral issue for Christians who question capitalism

“It is not from the benevolence of the butcher, the brewer, or the baker that we expect our dinner, but from their regard to their own interest. We address ourselves, not to their humanity but to their self-love, and never talk to them of our own necessities but of their advantages.”[i] Few sentences have proved the subject of more sustained controversy. Many have interpreted Adam Smith’s words as implying “greed is good.” Following the 2008 recession, concerns about the workings of greed and self-interest in the conditions of a market economy have only grown.

Not surprisingly, this issue of self-interest features heavily in many Catholic critiques of capitalism. On the face of it, Smith’s description of a fundamental motivating force underlying free markets seems to fly in the face of Christ’s call to love of neighbor and God. And greed is, after all, one of the seven deadly sins. The Scriptures, writings of the Fathers and Doctors of the Church, and constant teaching of the popes and councils are replete with condemnations of greed, especially love of money. Early in his pontificate, Pope Francis reminded Catholics that, from the Christian standpoint, there is something profoundly irrational about “greed for money that you can’t take with you and have to leave” when you die.[ii]

Smith’s words hark back to claims made by the Dutch-born English philosopher, economist, and satirist, Bernard de Mandeville (1670-1733), which are apparently even more offensive to Christian ethics. In his famous Fable of Bees[iii] Mandeville portrayed a community of bees that positively thrived – that is, until its members suddenly decided to act virtuously. As a result of the disappearance of their pursuit of personal gain, the bees’ world implodes. The surviving bees find themselves surviving in a hollow tree living rather uninteresting lives.

The less-than subliminal message underlying Mandeville’s tale was that public benefit flows, paradoxically enough, from allowing people to indulge their vices. Thus the decadent but wealthy hedonist who spends all her time indulging her senses may well be living a life of vice. Yet in doing so, she unintentionally provides incomes for numerous hoteliers, make-up artists, hairdressers, travel agents, wine-makers, bartenders, and restaurant owners.

Leading scholars of Smith’s thought, such as James Otteson and Ryan Patrick Hanley, have demonstrated that Smith’s conception of self-interest can neither be reduced to self-interest narrowly understood nor conceptualized in purely Mandevillian terms. They also observe that Smith’s Wealth of Nations should be situated in the wider corpus of his work, such as his Theory of Moral Sentiments (1759), which discusses the virtues and the moral life at length.[iv]

Whatever the nuances of Smith’s own position, the issue of self-interest does create particular intellectual challenges for pro-market Catholics. In many ways, the free economy does rely upon people pursuing their self-interest rather than being immediately focused upon promoting the wellbeing of others.

One response to this challenge is to recognize that fallen humanity cannot realize perfect justice in this world. “We can try to limit suffering, to fight against it”, Pope Benedict wrote in Spe Salvi, “but we cannot eliminate it.”[v] This Christian truth helps us to understand, like Saint Augustine, that what fallen humanity can achieve “is always less than we might wish.”[vi]

But long before Smith penned his Wealth of Nations, the Catholic Church acknowledged the role played by self-interest in generating, and, to an extent, legitimizing arrangements that bolster and incentivize economic liberty. Part of Aquinas’s defense of private ownership involves, for example, recognizing the un-reasonability of expecting most people to assume responsibility for the use of communally owned economic goods.