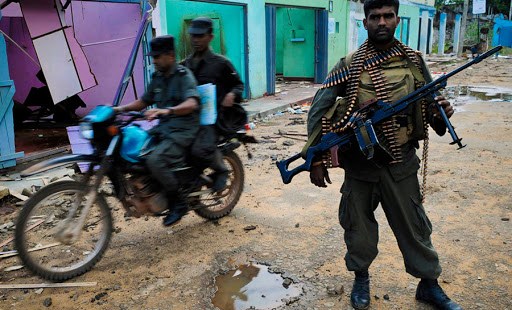 “Terror tactics are used to create a culture of silence that helps to form a dictatorship,” said Father Sarath Iddamalgoda, convener of the Christian Solidarity Movement.

Activists in Sri Lanka have denounced the killing of unarmed protesters by the military last week, which they claim is the latest sign of increasingly uncivil behavior by the armed forces.

Three people demonstrating against water contamination were shot on Thursday last week. Troops had entered a church in Weliweriya village, northeast of Colombo, and forced people to kneel down before assaulting them, eye-witnesses said. One of the victims was 17.

Forty priests and nuns were among 200 rights activists who yesterday denounced the incident during a protest outside the Colombo Fort railway station.

“Terror tactics are used to create a culture of silence that helps to form a dictatorship,” said Father Sarath Iddamalgoda, convener of the Christian Solidarity Movement.

“Unarmed civilians have been brutally killed during peaceful demonstrations at various places in the country. This has become a normal practice in the post-war Sri Lanka.”

Britain and the United States have expressed concern about last week’s killings. The Archbishop of Colombo, Malcolm Ranjith, condemned the attack at St Anthony’s Church in Weliweriya.

“We firmly request from the government to conduct an impartial and just inquiry into the incidents where innocent people were killed … and we request that those found guilty be punished without consideration of rank or state,” he said in a statement.