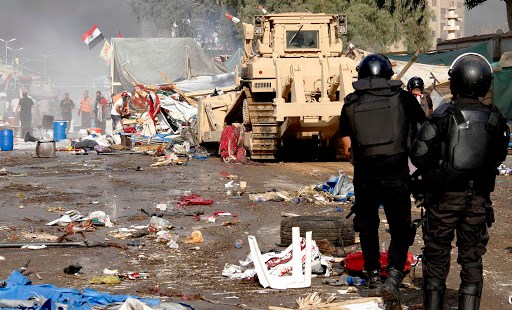 Egypt has officially declared a state of emergency after latest bloodshed

More bloodshed stains the streets of Egypt’s capital as armed security forces besiege the two main protest camps where thousands of pro Morsi supporters have been gathered for the past month and a half.

Mohammed Morsi was president of Egypt until he was ousted from power by a military coup after a series of nationwide protests. The situation quickly took a full turn however when Morsi supporters began to take to the streets, demanding his reinstatement to power.

The protests have not phased security forces and their ‘interim’ ministry however, as this morning they ploughed through the protest camps in a stiff attempt at dispersing the immense crowds.

Footage on Egyptian state TV reveals armed bulldozers rolling into the heart of the biggest of the camps in front of the eastern Rabbaa al-Adawia Mosque and the mayhem that has ensued.

BBC Bethany Bell reports from Cairo: “The ministry of the interior is saying that one of the camps, the one near cairo university at Anhada square has now been completely cleared; they are now combing that area looking for weapons…and they are also chasing some Muslim Brotherhood supporters who may have taken refuge in the zoo.”

She continues, “at the other camp, we understand, there are still people there, the muslim brotherhood is continuing to be defiant, it’s urging its supporters to converge on the big mosques and to head towards the protest camp areas.”

The Muslim Brotherhood (Morsi’s political party) have accused security forces of using extreme violence on the public. One of their spokesmen claimed that there have been at least 120 deaths caused by their latest moves.

The pro-Morsi protesters have set up a field hospital outside the mosque where the main thrust of demonstrations have taken place, in order to tend to the injured and the dead.

The interior ministry itself has denied using brute force, stating: “Security forces used only tear gas canisters to disperse the protesters though it was heavily fired at by armed elements from inside the two protest camps, causing the death of an officer and a conscript and the injury of four policemen and two conscripts."

The ministry have insisted that the latest moves were “necessary measures”, but have made public assurances that there would be a safe exit made for protesters, since it was not their goal to “shed any Egyptian blood.”

Pro Morsi supporters have been camped out at Nahda Square and the Rabaa al-Adawiya Mosque since the Military coup on the 3rd of July and despite military presence they seem to be determined to carry on as long as possible.

Veteran cameraman Mick Deane, who has worked for Sky News for the past 15 years has just been shot and killed while covering the violence in Cairo.  He was married with two sons.

The presidency has just declared Egypt to be in an official “state of emergency” which started at 4pm GMT today and will last for a month.