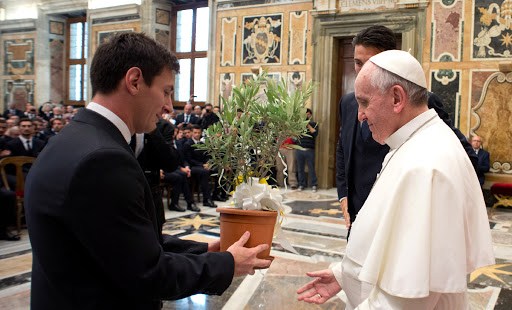 Following a century of Popes who have been enthusiastic about sports, Pope Francis met with the Italian and Argentine soccer teams, urging them to contribute to the common good in their calling.

“This is a social responsibility! Let me explain: In the game, when you are on the field, you find beauty, generosity, camaraderie. If a game is missing this, it loses its might, even if the team wins,” Pope Francis told the teams during an Aug. 13 audience at the Vatican's Clementine Hall.

Calling the values of generosity, camaraderie and beauty the “amateur” attitude of sports, he said that “when an athlete, even as a 'pro,' cultivates this 'amateur' dimension, he is contributing to the good of society, he is building up the common good.”

The Italian and Argentine national soccer teams are in Rome for a friendly match to be held Wednesday night to honor Pope Francis' pontificate. They will play in the city's Olympic Stadium, and the Pope will be watching it on television.

He began his address, which was delivered half in Italian and half in Spanish, by thanking them for organizing their match, and expressing relief that it is for fun and won't contribute to FIFA standings.

“Really, it would be a little difficult for me to be a fan, but fortunately it’s a 'friendly,'” the Argentina native joked.

Pope Francis reminded the players that they are watched “both on and off the field,” making their lives a “social responsibility.”

He emphasized that the professional sportsman is first and foremost, always, a human person, a “bearer of humanity.”

“Before being champions you are human beings, human persons, with your strengths and your flaws, with your hearts and your ideas, your aspirations and your problems. And then, even if you are personalities, you remain persons, in sport and in life.”

The pontiff reminded the managers that though soccer is a “big business,” they should promote the amateur dimensions of beauty, generosity and camaraderie among their players.

“When teams go along this road, the stadium is enriched in a human way.”

In Spanish, Pope Francis recalled going as a child with his family to see San Lorenzo, the Buenos Aires soccer team. “We went home happy, especially during the season of '46!” That year, San Lorenzo won all its home matches in its blue and red jerseys, and went on to beat both the Spanish and Portuguese national teams.

“Let’s see if any of you have the courage to score a goal like Pontoni,” he jested, referring to San Lorenzo's star player who played professional soccer from 1940 to 1954.

“I ask you to that you live your sport as a gift from God, an opportunity not only to bring your talents to fruition, but also as a responsibility. Dear players, I want especially to remind you that the way you behave, both on the field and off it, in life, is an example.”

Pope Francis impressed on the athletes that “the good you do makes an impression … you are a model, for good or ill, for so many people.”

“Set an example of loyalty, respect and selflessness.”

While Pope Francis' love for soccer is well-known – be became an honorary member of San Lorenzo in 2008 – he is only the last of a series of pontiffs who have focused pastoral attention on the value of sports.

In an interview with Bavarian Radio in 1978, Joseph Ratzinger, then the Archbishop of Munich and Freising, explained that soccer fascinates above all because “it leads the man to self-discipline”, so that “through the training man gains more self control, and through self-control he gains superiority, and through superiority, freedom.”

Pierre de Coubertin, the founder of the International Olympic Committee and the father of the modern Olympics, wrote in his diary that Pius X supported the candidature of the city of Rome to host the 1908 tournament.

Three years earlier, on Oct. 8, 1905, that Pope had told a group of young people that “the exercise of the body has a wonderful influence on spiritual exercise, since every exercise will distance you from idleness, and since even friendly matches will lead one to emulate the exercise of virtues.”

Though the 1908 Olympics were held in London, the Games came to Rome in 1960, and athletes from all over the world gathered in St. Peter’s square to receive the greeting and blessing of John XXIII.

And John Paul II took part in a soccer match between the Italian National representatives and a selection of all stars on Oct. 29, 2000 for the Jubilee of sportsmen.