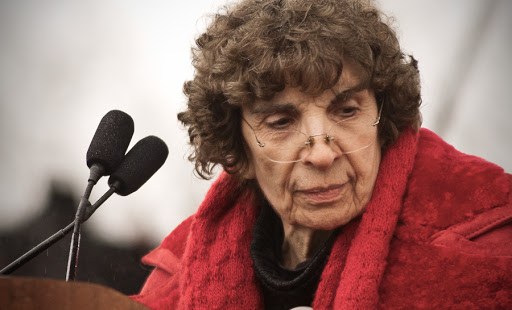 A year after her death, Nellie Gray – called the “Joan of Arc of the pro-life movement” – is still having a profound impact on the annual March for Life that she started nearly 40 years ago.

A year after her death, Nellie Gray – called the “Joan of Arc of the pro-life movement” – is still having a profound impact on the annual March for Life that she started nearly 40 years ago.

“Nellie will always have a strong presence,” said Jeannie Monahan, president of the March for Life.

She told CNA on Aug. 12 that while the organization is currently “in a time of transition,” it is not “doing away with the foundation built by Nellie,” but instead “standing on her shoulders” in order to look to the future.

Gray started the national March for Life in Washington, D.C., after the Supreme Court decisions Roe v. Wade and Doe v. Bolton made abortion legal throughout the United States. At the time, she was a federal worker in the Department of Labor, but she quit her job to work exclusively with the March for Life, running the annual event until her death on Aug. 13, 2012.

Gray’s dedication to the pro-life movement was spiritual as well, Monahan explained, noting that “she prayed for conversion of people who didn’t have the same views,” such as politicians, abortion doctors and women seeking abortions.

“In her own lifetime she did see many conversions,” Monahan continued, pointing to one of the marches in the early 1990s when Gray stood alongside Sandra Cano and Norma McCorvey – the two plaintiffs in the cases legalizing abortion – as well as Dr. Bernard Nathanson, an abortion doctor who promoted laws allowing the procedure throughout the U.S. All three of the individuals had become pro-life activists.

The March for Life has continued since Gray’s passing, with the organization adding additional staff members, expanding its outreach, activating a legislative branch and building an educational segment.

January 2013 marked the first time that the annual march has taken place without Gray, but Monahan said the event’s “positive, peaceful spirit” reflected the approach that its founder always held.

Commenting on the broader society, Monahan said that the past year has seen “the culture moving in a pro-life direction.” She pointed to numerous pro-life laws that have been passed in the last year, including a Texas law banning abortions after 20 weeks of pregnancy.

In addition, she referenced media and music as two areas in which a cultural shift is starting to be seen.

The goal of the March for Life, she explained, “is not only to change the laws but to change hearts, to create a culture where people wouldn’t want to choose abortion.”

“We are winning in the area of the culture of life in the United States.”

To commemorate the one-year anniversary of Gray’s passing, Monahan and the March for Life are asking pro-life supporters to “do something positive or beautiful for life” and share it via digital media with the label #marchforlife.

The March for Life’s website explains that these beautiful acts can include “prayer, an act of charity, a donation to a pro-life group, praying in front of an abortion clinic.”

“If Nellie were here today,” the website states, “she would not want to be praised for her work; rather she would want everyone to do something concrete that will help to build a culture of life.”