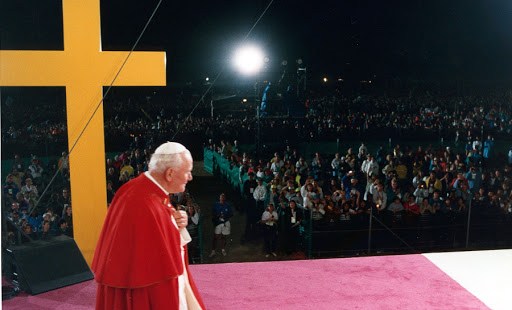 Reflecting on the World Youth Day in Denver that started, in the words of John Paul II, “a revolution” for the Catholic Church.

In 1992, Denver was one of three American cities that had been vying to host World Youth Day the following year.

That Palm Sunday, Pope John Paul II announced the fourth international gathering of Catholic youth would take place not in Buffalo, N.Y., or St. Paul, Minn., but in Denver.

Organizers could begin their work.

“Ultimately the choice was due to the inscrutable will of God,” Cardinal J. Francis Stafford of Rome, former Denver Archbishop, told the Denver Catholic Register. “The contingencies are dependent on his choice.”

Pope John Paul II made the final decision. He wanted the event, which had started as a youth rally in the Diocese of Rome and had become international, to be better organized and publicized, so he turned to the U.S. bishops feeling Americans excelled in organization and media.

“Denver and the West spoke of youthfulness and its closeness to the Rocky Mountains gave it international appeal,” said Sister Mary Ann Walsh, R.S.M., director of media relations for the U.S. bishops in Washington D.C., who served as communications director for WYD 1993.

Local pastor Msgr. Edward Buelt, who served as executive director and vice president for logistics for Denver’s WYD, recalled that in 1992 Denver was celebrating the 500th anniversary of the evangelization of the Americas, which had begun with Christopher Columbus’ arrival to the Dominican Republic in 1492.

“The Holy Father, I think, sensed that Denver was geographically and existentially more attuned to that anniversary since evangelization of the U.S. … came through South America,” he said.  “Secondly, the Holy Father was attempting to project the next 500 years of the evangelization of the Americas. … Denver clearly has a reputation that is keen in view of the center that we offer for communications for cable, for satellite and for the capacity to communicate globally.”

At the time, World Youth Days were a fairly new experience. This would be the first, and as yet only, time the international event was held in the United States.

“Many secular or civil organizers, including the press, had no context to evaluate it,” said Msgr. Buelt. “The closest the press ever came, which was not close at all, was trying to understand it as a Catholic Woodstock – a week of music and drugs and sex, which was obviously far from the Church’s expectation of what would and did happen.”

Journalists highlighted the “cafeteria Catholicism” of some Americans and the pontiff’s age, 73, to speculate that the event would not successfully appeal to young people. Additionally, Denver was experiencing terrifying drive-by shootings that led media to call 1993 the “Summer of Violence.” And if fear didn’t keep attendees away, even organizers weren’t certain American youths, unlike their European counterparts, would relate to the idea of “pilgrimage” upon which World Youth Days are based.

“There were many naysayers and many people who did not really think the young people would respond to John Paul II and his message,” said Denver Archbishop Samuel Aquila, who in his then-role as director of liturgy for the Denver Archdiocese helped plan the liturgies.

“It was predicted that the papal initiative would attract no more than 20,000 young people,” Cardinal Stafford said.

With hopeful optimism, organizers started planning for 60,000 people to attend the Aug. 11-15, 1993, WYD program of catechesis, liturgies and cultural events that included a closing Mass at Cherry Creek State Park celebrated by fellow pilgrim, Pope John Paul II. Denver’s WYD program diverged from previous ones in that the pope was to participate in twice as many liturgies and for more days.

“As the registrations started coming in, it went to 150,000,” said Archbishop Dennis Schnurr of Cincinnati, who served as national director for Denver’s WYD. “The final registration was 500,000. We know there were walk-ons, particularly for the final Mass. It was 750,000 people there.”

Denver’s program was so successful that it has remained the norm for subsequent World Youth Days, Archbishop Schnurr said.

“At the time I said it was as though we were building a minor city in the middle of nowhere,” Archbishop Schnurr said with a laugh.

Because the pope is a head of state, Secret Service was involved in the planning.

“We had to provide Secret Service with an outline of every event and who the people were who would be approaching the Holy Father, all in three-minute increments,” said Archbishop Aquila.

People on pilgrimage tend to not eat, drink or sleep well enough, noted Msgr. Buelt: “The biggest challenge, was attending to the health and well-being of the participants.”

“I remember that after people received holy Communion, we handed them bottles of water,” Sister Walsh said.

Despite the exhaustion and dehydration experienced by some pilgrims among the sea of humanity gathered at Cherry Creek State Park, estimated to be the largest public gathering in Colorado’s history, the closing Mass was a joyous, peaceful finale to the five-day pilgrimage.

“There was a sense of, ‘We did it!’” Sister Walsh said. “We were doing a lot from scratch. We’d never seen anything like it before.”

Organizers had planned a spiritual meeting of young people with the Holy Father and that’s what happened, Sister Walsh said.

“However, we never imagined the wonderful enthusiasm that would be everywhere. Our media plan was to let the pope and the youths tell the story, and they did. Joyful enthusiasm can’t be programmed, but it was evident everywhere. The media saw it.”

The presence of the Holy Spirit was palpable from beginning to end, organizers said.

“From the first day World Youth Day started, Aug. 11, the feast of St. Clare, to when the Holy Father’s airplane took off from Denver Aug. 15, all major crime ceased,” said Msgr. Buelt. “If I remember correctly, not a single felony occurred in those five and a half days.”

To go on pilgrimage requires a willingness to sacrifice and suffer to experience spiritual gain, said Archbishop Schnurr. The young people did that by lodging in parish halls on route to Denver, trudging through the heat to Cherry Creek State Park, sleeping on the ground there and enduring other discomforts. During the week, they encountered Jesus Christ in each other, in the sacramental life of the Church and through the catecheses, Archbishop Aquila said.

“In putting the program together I traveled throughout the U.S. talking to young people, saying ‘What would you like to see happen in Denver?’” Archbishop Schnurr said. “What I heard was: ‘We do not want to be called the Church of the future, we will do something in the future, but we want to offer our gifts now.’ That was John Paul II’s vision. He was reaching out to the young people and saying, ‘The Church needs your energy and enthusiasm!’”
The Second Vatican Council teaches that the Church is the true youth of the world because she is immortal, Msgr. Buelt said.

“In the past before World Youth Day 1993 in Denver, Pope John Paul II had expected that the spiritual revolution within the Church would be initiated by the young people of the Catholic Churches in Eastern Europe,” Cardinal Stafford said. “After Denver, he expected the anticipated spiritual ‘revolution’ to be emanating also from young Catholics of the West, especially the Americas. ‘Lux ex oriente et etiam ex occidente – ‘Light from the East as well as from the West.’”

Posted with permission from the Denver Catholic Register, official newspaper of the Archdiocese of Denver.