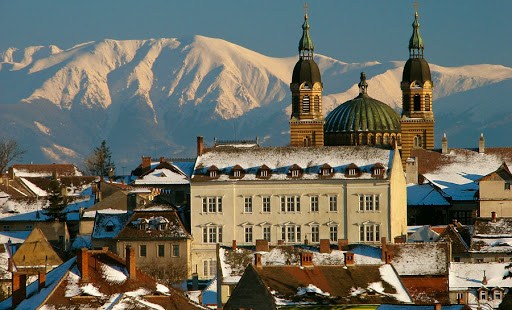 A group of 20 U.S. lawmakers is pushing the State department to encourage Romania’s government to return property confiscated from minority religious groups under the former communist regime.

A group of 20 U.S. lawmakers is pushing the State department to encourage Romania's government to return property confiscated from minority religious groups under the former communist regime.

“That’s our hope, that the Romanian government does reparations for what’s been seized, and makes things right.”

Harris authored a letter, signed by a bi-partisan group of 12 Republicans and seven Democrats, asking the U.S. Department of State to “vigorously engage the Romanian government to end the travesty of justice which it has perpetuated by failing to fully restitute properties illegally confiscated from religious denominations after 1945.”

Romania was behind the Iron Curtain following World War II, and in 1948 the country's communist government forcibly dissolved the Romanian Catholic Church, which is a Byzantine – or Greek – rite Church in full communion with the Bishop of Rome. It is headed by the Major Archbishop of Fagaras and Alba Iulia, Cardinal Lucian Muresan.

When the Church was dissolved, its properties were given to the Romanian Orthodox Church.

Some 86 percent of Romanians are Orthodox, and five percent are Roman Catholic. Romanian Catholics account for only one percent of the country's population.

After the communist regime fell in 1989, the Romanian government continued to deny Romanian Catholics the use of their churches, and until 2004 even prohibited them from being able to file lawsuits to win the churches back.

According to the Department of State’s 2012 International Religious Freedom Report, many lawsuits since 2004 have been delayed in court, and there have been moves in the Romanian parliament to stop restitution processes that would return the properties to their original owners.

The State department has repeatedly called the Romanian government’s failure to transfer properties back to the Romanian Catholic Church a “significant problem.”

“The lack of progress on restitution of … churches transferred by the former communist government to the Orthodox Church in 1948 remained a significant problem,” its latest report on international religious freedom stated.

The U.S. Congress adopted a resolution in 2005 calling for the restitution of religious properties in Romania.

The letter authored by Harris noted that “unfortunately, the Romanian response has been a pattern of disregard, delay, obfuscation and hindrance.”

It also noted several offenses by the Romanian government against religious freedom which happened in 2013 alone.

Particular attention was given to an April 17 law which “delays and complicates restitution” and an April 23 law “which deliberately omitted return of archival materials” which were seized from religious minorities in 1947.

“Rep. Chris Smith has cited the thousands of claims received by the European Court of Human Rights in Romanian property matters,” it added.

The State department issued a letter in response, signed by acting assistant secretary Thomas B. Gibbons, who said that property restitution “is an Administration priority that we have long raised with Romania and other European partners.”

“Advocating for the rights of Romania’s religious and ethnic minorities, including the rights of the Jewish, Hungarian, Greek-Catholic and Roma communities, is a key priority of the U.S. Embassy in Bucharest.”

The Romanian Greek-Catholic Association, a California-based advocacy group for Romanian Catholics, thanked the members of Congress who sent the letter to the State department, and voiced hope that the initiative will lead to a respect for “basic human rights” in the country.

“Their initiative provided hope for so many Catholics in Romania who are striving to have their human rights respected and be able to worship freely and without constraint in their own churches,” said Father Chris Terhes, president of the association and a priest of the Romanian Eparchy of St. George's in Canton.

He called on lawmakers to continue demanding that Romanian officials “restitute the properties confiscated under the communist regime, which would close a sad chapter of the Romanian history and help the country evolve to a functional democracy.”