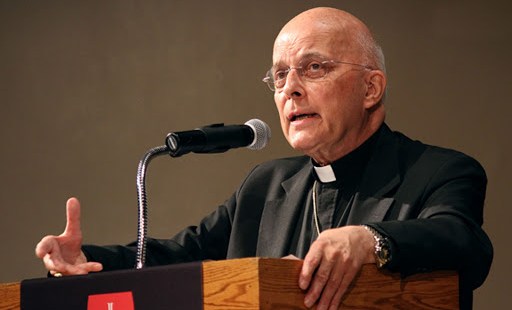 Cardinal Francis George of Chicago’s “intellectual vigor” and “forceful defense of the Church” may be why Pope Francis has yet to allow the 76-year-old cardinal to retire.

Cardinal Francis George of Chicago’s “intellectual vigor” and “forceful defense of the Church” may be why Pope Francis has yet to allow the 76-year-old cardinal to retire, one religion news observer has suggested.

“Cardinal George’s newspaper column often reads now like a battle plan against government overreach,” Nicholas G. Hahn III, the editor of RealClearReligion.org, said in the Wall Street Journal Aug. 23. “The cardinal takes a particularly grim view of what this intrusion by government could mean for church and state relations.”

The cardinal is now recovering from his second fight with cancer.

Hahn noted that Cardinal George, a former president of the U.S. Conference of Catholic Bishops, continues to play a prominent role in Chicago and in American public life.

The cardinal was active in the recent controversy over the Illinois Coalition of Immigrant and Refugee Rights, a church-funded group which endorsed “gay marriage” in May.

He warned that the endorsement could end Catholic Church financial support for the group. This drew opposition from several prominent state lawmakers who contended that Cardinal George was using immigrants and their allies as “pawns in a political battle.”

The cardinal, in a strong response in the Catholic New World newspaper, rebuked his critics.

“It is intellectually and morally dishonest to use the witness of the church’s concern for the poor as an excuse to attack the church’s teaching on the nature of marriage,” he said, reminding the politicians that they would have to account for their own actions.

“Jesus is merciful. But he is not stupid,” he said.

Hahn said Cardinal George’s decision on funding the immigrant group “had nothing to do with politics.”

“The Church doles out money to organizations on the assumption that they will not violate church teachings,” Hahn said. “If a church-funded environmental group announced its support for abortion, for instance, it could lose funding.”

Hahn said the immigrant group’s decision had “clearly broke an orthodoxy compact with the church.”

Cardinal George has also been an outspoken opponent of the HHS mandate requiring most Catholic organizations and employers to pay for or provide access to no-copay insurance coverage for employees that includes sterilization procedures and contraception, including early abortion drugs.

The cardinal said the Obama administration has acted as if there is a “right to free contraception” that trumps “the genuinely constitutional right of freedom of religion.” He said that the Catholic Church “will simply not cooperate” with the law.

Hahn also cited Cardinal George’s analysis of the root cause of the threat to religious freedom. The cardinal has said that the government’s tendency to claim authority over all areas of human life draws from “the secularization of our culture.”

“If God cannot be part of public life, then the state itself plays God,” Cardinal George said.

The cardinal’s public life has also included support for comprehensive immigration reform legislation, an issue on which he has stressed the bishops’ teaching authority.