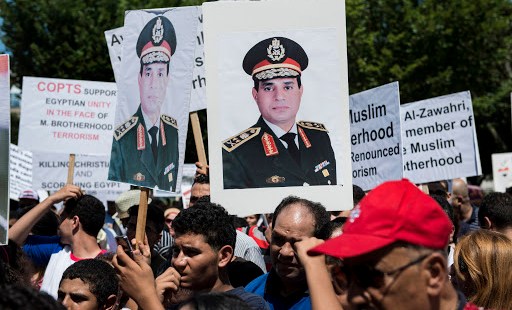 Hundreds of Egyptian Christians and Muslims gathered in Washington. D.C., on Aug. 22 to protest acts of terror directed against minorities – particularly Coptic Christians – in Egypt.

Hundreds of Egyptian Christians and Muslims gathered in Washington. D.C., on Aug. 22 to protest acts of terror directed against minorities – particularly Coptic Christians – in Egypt.

“You can burn down our churches, but you can never touch our faith,” said one protester at the march. “Burning 100 churches is terrorism, not Morsi legitimacy,” said another.

Violence erupted in Egypt after government security forces broke up camps of protestors allied with the Muslim Brotherhood on Aug. 14. The protesters had been demanding that President Mohammed Morsi be returned to power after he had been ousted by the military last month.

Hundreds of people have been killed in the violent clashes that have followed. Coptic Christians – who make up 10 percent of the population in Egypt – have been particularly targeted in attacks attributed to terrorists who are members of the Muslim Brotherhood.

More than 60 churches have been attacked, along with numerous homes, businesses and institutions owned by Christians. The protests in downtown Washington, D.C., were held in response to the violence.

Atef Jacoub of Coptic Solidarity, who helped organize the event, explained to CNA that some 500 Muslims and Christians from across the country participated in the march “in support of the interim government in Egypt.”

The march route began at the White House, taking protesters past the Washington Post offices and the Council on American Islamic Relations.

“Many Coptic persons were killed” by the previous government, and those supporting him after his ousting, Jacoub said, adding that the Muslim Brotherhood and other supporters of the Morsi presidency “abuse the Christian community much more than the regular Egyptian community.”

Michael Hanna, a Coptic Christian who attended the march, said he joined the protest because “I am against terrorism.”

“Copts like me are here today,” he said, because some “68 churches that have been burnt,” and in the wake of the violence, “they feel like Christians are targets.”

Suzanne El Nahel, another protester at the march, echoed Hanna’s comments. “To rule as a democracy, you have to respect minorities – whether they are Muslims, Christians or any other faction,” she said.

“We cannot live like that in Egypt,” she said.