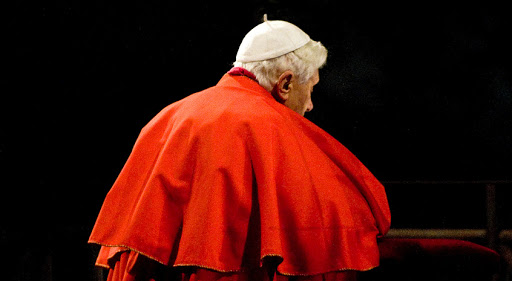 The retired pontiff’s personal secretary said that the recent and widely circulated news story claiming that Benedict XVI stepped down after having a “mystical experience” is false.

“It was invented from the alpha to the omega,” Archbishop Georg Gänswein said Aug. 25.

“There is nothing true in this article,” he added in an interview with journalist Alessandra Buzzetti on Italian television channel Tg5.

Rome-based Catholic news outlet “Zenit” had reported last week that Benedict XVI resigned after having a mystical experience in which God told him to do so.

The agency said that the former Pope told a visitor to Mater Ecclesiae, the monastery in the Vatican where he currently resides, that God “did not speak to him in a vision but in a mystical experience.”

Tg5 interviewed the Archbishop Gänswein on Aug. 25 in the town of Castel Gandolfo, where the papal summer residence is located.

Benedict XVI and his personal secretary had traveled there from the Vatican to celebrate the town’s feast of Our Lady of the Lake the day prior, which included an evening Mass presided by the retired pontiff.

“The Pope Emeritus is very well and he was here to visit the palace because there was a small concert and to take a beautiful walk in the gardens and have dinner there,” the archbishop said.

On Feb. 11 of this year, Benedict XVI announced his resignation which went into effect on Feb. 28. He then stayed in Castel Gandolfo during the cardinals’ election of a new Pope.

After Pope Francis was chosen, the former pontiff moved back to the Vatican to live in a monastery with Archbishop Gänswein, who is also prefect of the papal household.

The archbishop reflected that annually for the last eight years, he and Benedict XVI along with others from the Vatican came to Castel Gandolfo for “a few weeks” – an “experience,” he said, “that we now miss.”

Originally published at Catholic News Agency on 27 August 2013. Used by permission. All other rights reserved.