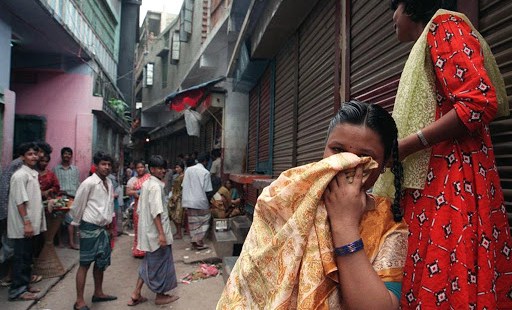 Women in Bangladesh brothel district say they have nowhere to go

Police evicted about 500 sex workers from one of Bangladesh’s oldest brothel districts yesterday after hardline Muslims from the local Islahe Quom Parishad group attacked women working at the site, injuring 30.

Police rushed to the 250-year-old brothel district in Maradipur town, 190 kms south of Dhaka, after trouble broke out. They fired warning shots before supervising the women as they left.

“Many of the workers have children and have nowhere to go,” said one of the sex workers, who did not give her real name.

She added that the Muslim group which attacked the tightly knit district of brothel houses looted valuables and beat up some of the women.

Joya Sikder, president of the Sex Worker’s Network, told a Dhaka press conference yesterday that the eviction was motivated by land grabbing. The site has remained in the hands of sex workers for generations, many of whom were born or forced into sex slavery.

“The brothel land is valuable as it’s located in the heart of the town,” said Sikder.

The evictions come despite a July 22 court order which prohibited the Home Ministry and police from harassing brothel residents, following an earlier series of protests by hardline Muslims. Sex workers at the site were told that they could stay there for at least one year until they could be rehabilitated.

“The brothel is not authorized by the government. Sex workers have rented houses there and despite repeated requests from the house owners, they didn’t leave,” he said.

Prostitution is a grey area in Bangladesh. Although the constitution discourages the sex industry and calls forced and child prostitution a crime there is no legislation which bans sex work outright.

“We have been campaigning to make the town free of prostitutes because it is a sinful act and the brothel is corrupting local young men,” he said.

An estimated 100,000 sex workers operate in brothels across Bangladeshy. Many of them are trafficked and trapped in the industry due to the social stigma which means they often have nowhere else to go and work.

Originally published at UCAnews on 28 August 2013. Used by permission. All other rights reserved.