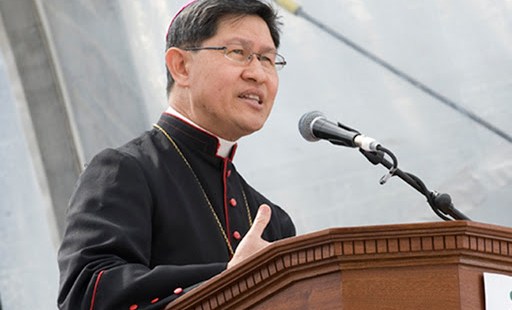 In a speech to a gathering of business executives, Cardinal Tagle explained the importance of avoiding temptation through the country’s recent economic success.

Cardinal Luis Antonio Tagle, archbishop of Manila, cautioned the country’s business sector today to be “discerning” and prudent in its quest for profit.

His words follow good news from Moody’s Analytics, an international provider of economic data and forecasting. Its report this week said that the Philippine economy reached 7.2 percent growth in gross domestic product in the second quarter of 2013, making the country “one of the world’s fastest-growing economies.”

Cardinal Tagle told a gathering of business executives: “I know sometimes in our rush to be productive, we can cut corners.”

Addressing a breakfast meeting of the Brotherhood of Christian Businessmen and Professionals, an organization with 75 chapters nationwide, he said: “Let us discern God’s way for us to be more productive.”

He added that “productivity will vanish” if it is not done “according to God’s ways,” and urged the country’s business community to be “aware and sensitive” about temptations.

“We need a certain refinement of spirit to be able to detect whether what is before us is temptation,” Tagle said. He also called on the business sector to be “more contributory to development.”