You Are Going to Die 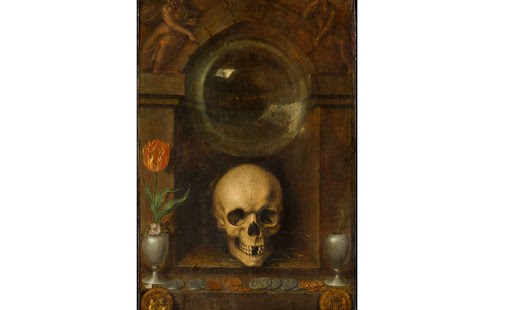 When European trade stretched around the globe in the 17th century bringing in great wealth, a new genre of art developed, “vanitas”, to remind people that life is short – and to live accordingly.

This week’s image comes from a very different background to the other two traditions discussed already.  For me the “still life” genre is the most exciting of all because it does require the use of a universal language if it is to supply a metaphor for a subject that is completely “other” from that which it represents.  Over these next two weeks we will look at two types of still life: the first is fairly straightforward in terms of content, whilst the second is quite literally a visual metaphor for Church teaching.

The above image comes from a 17th century movement called vanitas paintings.  They emerged in the Dutch Republic in opposition to the rampant materialism which exploded into Dutch society as a result of the highly successful commercial trade industry of that time.  You may have heard of the East India Trade company which transported all manner of goods from the Far and Middle East to the hub of trading in Holland.  The French philosopher Denis Diderot described the Dutch as “human ants” who scoured the world gathering up everything “scarce, useful or precious” to bring back to their storehouses.  The upshot of this of course, mean’t that the Dutch middle and upper classes filled their lives with this new found diversity of product.  The reaction was swift and in the arts found a voice through the vanitas genre.  The word “vanitas” comes from Ecclesiastes 1:2 and 12:8: “vanity of vanities: all is vanity” (in the New Jerusalem Bible it is translated as “futility”) and if you look at the image above by the artist Jacques de Gheyn, you can probably get the gist of what the artist is trying to say.  The symbolism employed within the art work was designed to shock the viewers back to their senses, its over-arching theme being that life is short and therefore priorities should be sorted out before death overcomes us.

If you search for “vanitas” in Google Images you will see common features that appear in all the paintings, i.e., objects that convey the idea of death such as human skulls, snuffed out candles, over-turned wine goblets etc.  In our chosen work (commonly believed to be the first of this particular genre) both a skull and snuffed out candle are used.  The skull is an obvious symbol but the insertion of a wisp of smoke suggests to the viewer that the owner of the various objects has quite suddenly departed giving a conspicuous sense of urgency to the work.

You will notice identical vases standing on either side of the skull.  In the vase on the left there rests a single tulip and a small wild flower, while on the right the other stands empty except for our wisp of smoke – what do you think the artist is trying to express?  In the 17th century, the tulip was a sign of extreme wealth in the Dutch Republic, a single flower could be sold at a very high price, even exorbitant if it were sold at auction.  Indeed, many historians today describe the interest in tulips at that time as “tulip mania”.  However, the beauty of the tulip is transient and lasts only for a very short time before the natural process of decay sets in. To emphasise this point, the little wild flower that shares its vase has already shed a petal – the decay has started not from without but within.  A stark message begins to emerge.  The vain pursuit of wealth and beauty by the human person is a dangerous business and to underline this, the identical vase on the opposite side of the skull emits a little spiral of smoke indicating that something has just burnt out and exists no more, i.e., the life of the departed which the skull and the smoke represent.

Above the skull and at either side of a large soap bubble, rest two sculpted figures.  These are the ancient Greek philosophers Heraclitus (on the right) and Democritus (on the left) – they represent two very contradictory world-views.  Heraclitus grasps his head in despair at the weakness and frailty of the human person, while Democritus (a skeptic) laughs in scorn at the chaotic nature of such a condition.  They both point toward the large soap bubble as the source of their stance.  In the Republic at that time there was a commonly known local proverb: “Man is a soap bubble”,  and such imagery appears in quite a few vanitas paintings.  A soap bubble lasts, at best, for a few minutes only; couple this with its globe-like shape and a powerful expression of the fragility of life and the transience of the world is achieved.  However, it is not simply this more obvious symbolism that the philosophers are pointing at.  What cannot be seen in a photograph of the painting, are the images added as reflections on the soapy surface.  There are wine glasses, playing cards and dice depicted, representing the more decadent pleasures or vices that the human condition is drawn towards.  There is a human heart pierced with a dagger suggesting the agony of human love and wanton desire.  A wheel of torture symbolises cruelty, while a medical flask and a leper’s rattle represent the frailty of the human body.  In the middle of the bubble a crown and sceptre can be discerned representing the lust for worldly power, while war insignia speaks of aggression and the desire to dominate.  Coins spilling from a money bag signify greed and wastefulness.

As if any of this were not enough to drive the message home to us, our eyes are then drawn downwards to a row of coins laid out as if forgotten.  These small pieces of metal, craved by the bulk of humanity, were most certainly important to the departed soul that we are now getting to know with eerie discomfort.  At either end of the row stands a gold ten ducat coin with the profile of the Holy Roman Emporer Charles V on one side and his mother Joanna on the other, again representing the futility and transience of power, fame and fortune as well as a reminder that none of these can be taken on the journey after death.

The discomfort that the viewer might be feeling by now is further enhanced by the composition of the work.  The skull itself is placed in a position that would be at eye level to the viewer.  Can you think why de Gheyn might have painted it that way?  In placing the skull where it is, the artist is holding a mirror to the onlooker, a reflection of each of us at a certain point in our lives, a confrontation with our own mortality.  However, the timing of our own departure is veiled, none of us know when that point will be – later or (even more disconcerting) sooner.  Those empty eye sockets stare back at us with a relentless unseeing blackness, a darkness that also pierces through the undignified gap in the teeth – nature cares not for our dignity, even the powerful and the mighty end up this way.  The dark hollow of the niche that the skull stands in, further fuels our unease: this is not an exercise in hope, but a battle cry for change.

Unlike many of the vanitas works, the composition in de Gheyn’s painting is symmetrical, a device that is usually employed in order to give a sense of unity.  However, the symmetry here is not used to establish a fragmented world-view, but rather a process from one to the other, from beauty and pleasure to pain and decay, a reflection of the human journey through life and a stark reminder that this journey can be all too brief.