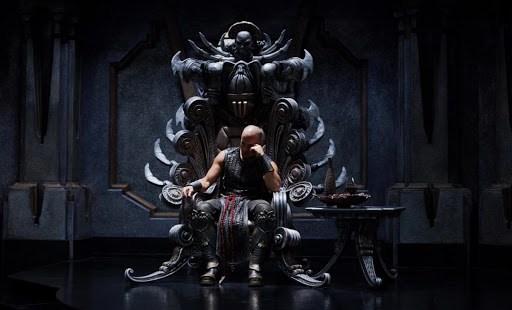 If you were one of the few people who liked the last Riddick installment from almost a decade ago, or if your just like watching an anti-hero kill things, then you’ll probably like this movie.

You know, it seems like it's been awhile since everyone’s favorite shiny-eyed mass murderer made an appearance on the big screen, doesn’t it? I imagine that’s because in this day and age, when sequels are put into production before the first movie even opens, nine years feels like a long time in between pictures. Of course, the fact that the last film in the Riddick franchise kind of stunk up the place and bombed terribly probably had a lot to do with the delay.

2000’s Pitch Black, in which the character of Riddick was first introduced, was a surprisingly effective low budget B-movie, full of brisk action and cool monsters, and featuring an interesting protagonist who reluctantly harnessed his killer instincts when unexpectedly confronted with actual human decency. It didn’t set the world on fire, but the movie did well enough at the box office and garnered a cult following. Unfortunately, most of the good will generated by Pitch Black was lost when the inevitable sequel, The Chronicles of Riddick, hit theaters in 2004. While the first film was small in scale and told an intimate story, the second quadrupled its predecessor’s budget and used the extra funds to try and turn the narrative into a full-blown space opera incorporating bits from Star Wars, Dune, and even Superman. Suddenly, rather than just being a simple trained killer skirting the edge of redemption, Riddick became the last of a long-lost race of super-soldiers; the prophesied chosen one (yes, another “chosen one” – how many does that make now?) who would bring doom to the Lord Marshall, leader of an insane intergalactic religious cult known as the Necromongers. The movie was bloated and convoluted, and most audiences avoided it accordingly.

But nine years have passed since then, and Vin Diesel and writer-director David Twohy have decided to give Riddick another go. This time, however, whether it’s because they actually learned their lesson or simply because nobody would give them lots of money to make the same mistake twice, the pair have eschewed the operatic excesses of their last effort and chosen instead to return Riddick to something resembling his more humble origins. In short, as the movie begins, we once again find a half-dead Riddick stranded alone on a barren planet surrounded by alien beasties hungry for his bald head.

It’s only after Riddick fends off numerous attacks by alien buzzards and alien dogs and alien eels and alien… somethings (they look sort of like scorpions with human arms doing a handstand) that the film settles down and explains how Riddick ended up in his current predicament. Now if you don’t happen to remember all the plot points from the previous two films made a decade ago, you’re out of luck, as the latest film just assumes you’re up to date on all your Riddick trivia. All it gives us in the way of explanation is that Riddick, having grown restless in his role as the new Lord Marshall of the Necromongers, eagerly abandoned his throne when word came that his home planet of Furya had at last been discovered.

The information turned out to be a lie, however – nothing more than bait to lure Riddick to an isolated world  where assassins planned to kill him. Riddick isn’t one to die easily, though, and he managed to escape with only a broken bone or two after the last surviving assassin dropped a mountain on him. Now I’m sure that sounds a little suspect, but remember that Riddick is modeled after the action heroes of the 80s, and those guys brushed off mountains being dropped on them every other day. At any rate, Riddick was left for dead with no weapons, no food, and no apparent way to escape, which is where we come in.

Fighting his way to a deserted mercenary outpost on the far side of the planet, Riddick activates a rescue beacon and waits for aid to come. Of course – his being Riddick and all – the only people willing to respond are two ships full of bounty hunters, one crew hoping to kill him quickly (due to his many escapes over the years, the bounty on his head is doubled if Riddick is brought back dead) and the other hoping to keep him alive (temporarily) for reasons of their own. Riddick helpfully offers not to immediately kill everybody in sight if they’ll simply give him one of the ships to escape in, but naturally, the bounty hunters refuse and bloody mayhem ensues. To complicate matters, Riddick’s super-shiny-vision has revealed that an approaching storm threatens to awaken every monster in the area, unleashing a force that even he might not be able to withstand.

Basically, Riddick wants to be Pitch Black with a little bit of backstory thrown in for the die-hard fans and those with long memories (or at least those with access to Wikipedia – *wink-wink*). The film adamantly sticks to the basics of the character: something or someone threatens Riddick, and he kills them; someone tries to prove they’re smarter than Riddick, but they fail and he kills them; somebody looks at Riddick in the wrong way and he gives them a look back with those shiny eyes that lets them know he could kill them if he wanted to. About the only people Riddick comes close to treating like human beings are the bible-toting teenager, whom he amazingly never insults, and the lesbian, whom he eventually charms into bed (forget all that conversion therapy stuff – just send in the über-macho Riddick, and all traces of lesbianism will completely disappear overnight). Other than that, he pretty much just kills things. What can I say? – Riddick didn’t become the most hunted man in the galaxy by floating bad checks. He’s a born killing machine, and he doesn’t change all that much.

That lack of character development isn’t necessarily a problem in and of itself. Many movie series get by just fine with a recurring protagonist who changes very little from film to film. Tarzan, James Bond, John McClane – none of those guys go through very much personal growth over the course of their pictures, but audiences line up to see them time and time again anyway. The difference, obviously, is that those guys are heroes, and according to what psychologists refer to as Affective Disposition Theory, most folks are predisposed to like the people they see in movies when those people do heroic things. So Tarzan can spend all his off-screen time doing nothing but sitting around with the apes picking parasites off of each other for all anyone cares, just as long as he rushes to the aid of the Gomangani once the cameras start rolling. People like to watch heroes.

But Riddick, at his best, barely qualifies as an anti-hero, much less a hero. His primary motivation is self-preservation, followed by a vaguely defined need to locate the planet of his birth. Anybody who gets in the way of those two goals is disposable. Now like most movies featuring an anti-hero as the main character, the script tries to sidestep this moral conundrum by having the majority of the people Riddick dispatches fall into the "he needed killin'" department (who knows? – maybe they’re all really stranded in Texas). The bulk of the bounty hunters are so repulsive (one of the groups murder a rape victim AND shoot Riddick’s dog) that it’s hard to drum up any sympathy for them when they meet their gruesome end. Riddick, who sits by and watches the rape victim bleed out without so much as a sympathetic word, may be a monster, but at least he wouldn’t kill a dog in cold blood, for crying out loud.

Recent studies suggest this kind of mental gymnastics is necessary in order for viewers to enjoy the antics of anti-heroes. By disengaging from moral absolutes, media consumers are able to overlook some of the less attractive traits of the anti-hero and focus instead on those things they share in common. (“Hey, Riddick wouldn’t kill a dog, and neither would I… maybe he’s not that bad of a guy, after all.”) In effect, while we may still hold our cinematic heroes to lofty ideals, we tend to cut celluloid anti-heroes the same kind of slack we typically reserve for ourselves. When asked about audiences’ tendencies to identify with anti-heroes in this fashion, David Simon, writer and producer of television’s The Shield, explained it away like this: “With the exception of saints and sociopaths, few in this world are anything but a confused and corrupted combination of personal motivations – most of them selfish, some of them hilarious.” There may be some truth in that statement, but the problem with it is obvious. Even though we might fall short, rather than simply lowering the bar for the standards, God asked us to at least make the effort to be saints.

Does all that mean you should avoid Riddick? Well, that’s up to you; if you’ve enjoyed seeing Riddick kill things in spectacular fashion in the past (assuming you can remember that far back), then by all means buy a ticket, because he does lots more of it over this movie’s tediously long two-hour running time. Just be aware that’s about all the movie has to offer. If you’re looking for likable characters, an actual story, or – heaven forbid – a real hero, it’s probably best to look elsewhere.