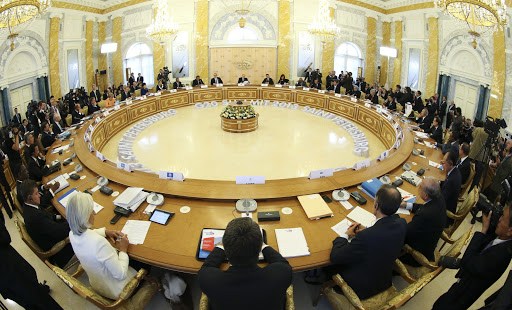 As the G20 gathers in Russia, the Holy Father sends them an urgent plea

As world leaders meet in St. Petersburg, Russia, for the G20 summit, Pope Francis has sent a message urging against military involvement in Syria.

“To the leaders present, to each and every one, I make a heartfelt appeal for them to help find ways to overcome the conflicting positions and to lay aside the futile pursuit of a military solution,” said Pope Francis in a Sept. 4 letter to the group’s leader, Russian president Vladimir Putin.

“It is clear that, for the world’s peoples, armed conflicts are always a deliberate negation of international harmony and create profound divisions and deep wounds which require many years to heal,” he told the leaders of the world’s twenty largest economies.

The Pope told the Russian president that although the meeting does not have international security as its main focus, it will “surely not forget the situation in the Middle East and particularly in Syria.”

“It is regrettable that, from the very beginning of the conflict in Syria, one-sided interests have prevailed and in fact hindered the search for a solution that would have avoided the senseless massacre now unfolding,” said Pope Francis.

The Pontiff told Putin he would also pray “for the successful outcome of the G20’s work on this occasion” adding that he hoped the letter “may be a valid spiritual contribution” to the meeting.

The G20 is an economic meeting held regularly between the heads of state and governments of the twenty most powerful economies. It is usually taken as an opportunity to strengthen diplomatic ties between nations.

Putin has reportedly told leaders that the injurious Syrian conflict and potential military response, which are not on the official agenda, “will be discussed over dinner.”

“Wars are a concrete refusal to pursue the great economic and social goals that the international community has set itself, as seen, for example in the Millennium Development Goals,” said the Pope.

“Unfortunately, the many armed conflicts which continue to afflict the world today present us daily with dramatic images of misery, hunger, illness and death,” he added.

Pope Francis told Putin and the assembled world leaders that “without peace, there can be no form of economic development.”

In his letter, the Pope reminded them that “all governments have the moral duty to do everything possible to ensure humanitarian assistance to those suffering because of the conflict, both within and beyond the country’s borders.”

“The leaders of the G20 cannot remain indifferent to the dramatic situation of the beloved Syrian people which has lasted far too long, and even risks bringing greater suffering to a region bitterly tested by strife and needful of peace,” he said.

Originally published at Catholic News Agency on 5 September 2013. Used with permission. All other rights reserved.