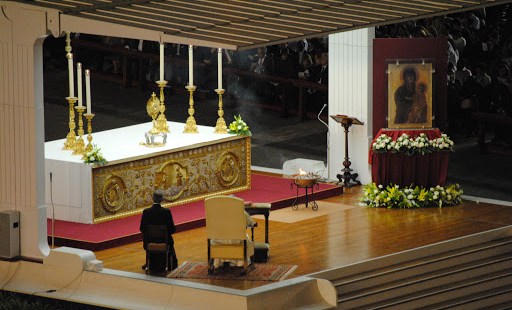 Addressing myriad people in St. Peter’s Square, Pope Francis denounced war as a “defeat for humanity” and called on world leaders and individual Christians alike to rebuild a “shattered” harmony.

Pope Francis and an estimated one hundred thousand people knelt in prayer together in St. Peter’s Square Saturday evening, seeking peace throughout the globe and especially in Syria. The Vatican prayer vigil included hymns, scripture readings, and silent reflection as incense drifted into the night sky.

The U.S. has threatened military strikes against the Syrian government, which the U.S. blames for the deaths of over 1,400 people, including hundreds of children, in an Aug. 21 chemical weapons attack.

The conflict between the Syrian government and rebel forces has claimed over 100,000 lives since it began in March 2011. Many fear U.S. intervention would increase the violence and spark a wider conflict.

“War always marks the failure of peace. It is always a defeat for humanity,” he said, echoing Pope John Paul II’s words before the 2003 U.S. invasion of Iraq.

“Look upon your brother’s sorrow and do not add to it. Stay your hand! Rebuild the harmony that has been shattered!”

The Pope said that those who pray for peace must consider their own responsibility for conflict in a fallen world.

“Even today, we let ourselves be guided by idols, by selfishness, by our own interests, and this attitude persists,” he lamented. “We have perfected our weapons, our conscience has fallen asleep, and we have sharpened our ideas to justify ourselves.”

Violence, he said, repeats the sin of the first murderer, Cain.

“We bring about the rebirth of Cain in every act of violence and every war. All of us,” Pope Francis declared. “Even today we continue this history of conflict between brothers. Even today we raise our hand against our brother.”

He considered whether it was possible for humanity to change direction.

“Can we get out of this spiral of sorrow and death? Can we learn once again to walk and live in the ways of peace?” he asked.

“Yes, it is possible for everyone!” he declared. He called on every person, including those who govern nations, to say “yes” to peace.

The Pope placed the Crucifixion of Jesus Christ at the center of his homily.

“In the silence of the Cross, the uproar of weapons ceases and the language of reconciliation, forgiveness, dialogue and peace is spoken,” he explained.

The Pope reflected on the goodness of creation as taught in Genesis, where humanity is “one family, in which relationships are marked by a true fraternity.”

In the beginning, mankind’s relationship with God “mirrors every human relationship and brings harmony to the whole of creation,” explained Pope Francis.

Although the world is now marked by sin, this original goodness should inspire us, the Pope urged.

“This evening, in reflection, fasting and prayer, each of us deep down should ask ourselves: Is this really the world that I desire?”

Each person must realize that “to be human means to care for one another,” he continued, calling this a way to peace.

“Dear brothers and sisters: forgiveness, dialogue, reconciliation. These are the words of peace in beloved Syria, in the Middle East, in all the world,” the Pope said.

The Pope’s vigil remarks followed a recitation of the rosary with meditations from the writing of St. Therese of Lisieux.

At the start of the vigil, an image of Mary known as “Salus Populi Romani,” the “Protectress of the Roman People,” was placed near the altar to serve as an inspiration for prayer.

After his homily, Pope Francis joined tens of thousands of people in silent adoration before the Eucharist. He noticeably clutched his own pectoral cross.

After the Liturgy of the Hours prayers, the evening concluded with Benediction.

Thousands of other prayer vigils are being held around the world in response to the Pope’s call to prayer.

Greg Burke, senior communications adviser to the Holy See’s Secretariat of State, said Pope Francis has engaged in a “major peace initiative” in response to the Syria crisis.

“Pope Francis wants to keep this issue alive to make sure everything possible could be done to put an end to the violence, and not to increase it,” Burke said.

Originally published at Catholic News Agency on 7 September 2013. Used with permission. All other rights reserved.