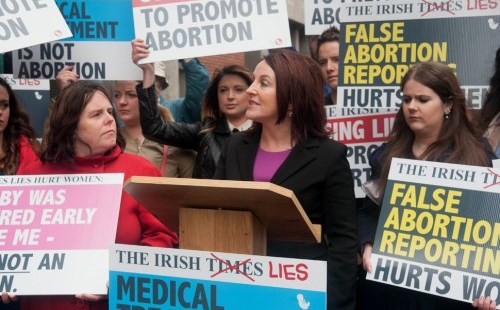 A protest outside the Irish Times office today, Saturday 7th September, heard women ask the paper to 'tell the truth on abortion' and stop misleading the public.

The protest took place as controversy continues over the admittance by the Irish Times that its report of 'first abortion carried out under new legislation' was false.

"We're calling on The Irish Times to tell the truth on abortion; to stop hurting women by wrongfully insisting that necessary medical interventions are abortions; and to stop misleading the public as to the facts," said Niamh Uí Bhriain of the Life Institute who organised the event with Youth Defence.

Ms Uí Bhriain said that the important distinction between abortion and an early delivery to save a mother was key to medical practice, but this distinction was being deliberately confused by the media.

She pointed out that nothing about the Irish Times story or subsequent retraction made sense unless it was the case that the paper had rushed to print to try to justify the passage of abortion legislation.

"If that is the case, it has badly backfired on the Irish Times," said Ms Ui Bhriain, "since they have now, in fact, shown quite the opposite; that mothers lives are not lost because of our ban on abortion."

Maria Mhic Mheanmain, a mother whose baby was delivered prematurely when Maria's life was at risk because of pre-eclampsia, said that the paper needed to recognise that neither women nor doctors described these interventions as abortions.

"The clarification offered by the Irish Times raises more questions than it answers. What agenda were they trying to push?" she said. "Women deserve better than this, and so do the public."

The paper claimed that the National Maternity Hospital carried out Ireland's first abortion on a mother of twins, provoking fury from medical staff regarding the breach of patient confidentiality.

The Irish Times was also at pains to try to compare the case with that of Savita Halappanavar, suggesting that the abortion legislation would have saved Savita's life.

The paper was left red-faced when it emerged almost immediately that the abortion legislation had not yet commenced, and that the intervention took place under the same law that has always allowed doctors to intervene in Ireland.

"Clearly, doctors understand that in cases such as this – described by the Irish Times as being similar to Savita – interventions to save the mother are not just lawful, they are essential," said Ms Mhic Mheanmain, a registered medical practitioner.

The Irish Times has now admitted that the abortion 'did not happen' as described, but the clarification has been slammed by legal expert, Simon McGarr,  who said the apology was inadequate and not given 'due prominence' in accordance with the Code of Practice of the Press Council of Ireland.

Originally published at Life Institute on 7 September 2013. Used with permission. All other rights reserved.