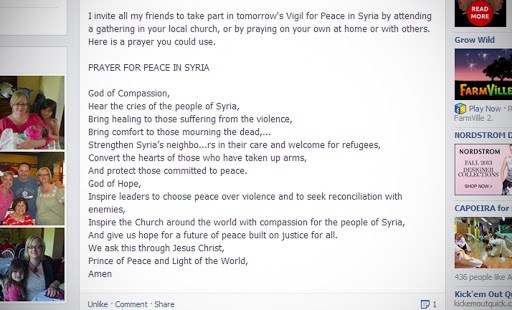 South African bishops ask Christians to pray for peace not only in churches, but also at home and even through social networks.

The Church in Africa has mobilized in response to the appeal launched by Pope Francis for a day of prayer and fasting for peace in Syria, the Middle East and the world, organized for Saturday, September 7.

The Bishops of Gabon have exposed the Blessed Sacrament in all the parishes inviting the faithful to go there to pray according to the Pope’s intentions.

In South Africa, the Bishops ask Christians to pray for peace not only in churches but also at home and even through social networks. The Catholic station Radio Veritas will also air a special prayer vigil for the occasion.

Even in Mali, which has just come out of a serious separatist conflict, "the Bishops, "refers Fr. Edmond Dembele, Secretary of the local Episcopal Conference, "have called on Christians and all Malians of good will to respond to Pope Francis’ appeal to pray and fast in order to avoid the world, and especially the innocent civilians, a conflict which no one knows the outcomes and the damage they could face."