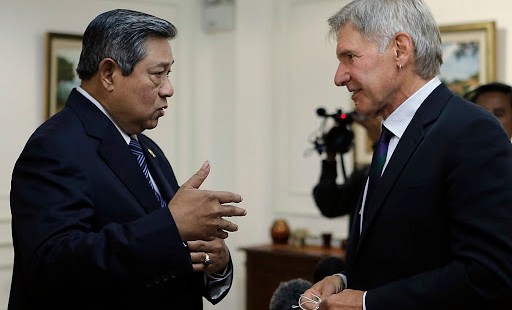 The Hollywood bigshot speaks out against rampant deforestation

Hollywood actor Harrison Ford has lobbied Indonesia’s President Susilo Bambang Yudhoyono to stem the rate of deforestation in the country, during a visit to film part of a star-studded international documentary series on climate change.

Ford arrived on Monday for a series of meetings with top government officials, and shot footage in the Orangutan Centre in Central Kalimantan and Tesso Nilo National Park in Riau, Sumatra.

The Star Wars actor reportedly angered forestry minister Zulkifli Hasan with accounts of the condition of forest in Tesso Nilo, and pressed the minister on why authorities had not arrested any perpetrators of the deforestation.

Activist Riko Kurniawan from the Indonesian Forum for the Environment (Walhi), who was among those accompanying Ford when filming in Sumatra, said the actor was shocked to learn that 63,000 hectares of Tesso Nilo’s total 83,000 hectares of forest had been destroyed.

“Our government is always angry when a foreigner shows concern about our [environmental] problems,” said Kurniawan. “That’s our government, it will never learn from them.”

President spokesperson Julian Aldrin Pasha said in a statement yesterday that Yudhoyono has instructed relevant authorities to take action against those who obstruct forest conservation.

“The president told Ford that Indonesia is serious in terms of rescuing and preserving the forests,” he said, adding that the government has been seeking cooperation with international groups.

Despite the government’s claims, Yuyun Indradi, forest protection campaigner from Greenpeace Indonesia, told ucanews.com on Wednesday that “the government has not been transparent in reporting its dealing with forest issues.

A report by Walhi released early this year said that mining and plantation companies have become the primary cause of environmental destruction.

It said that as of June last year, the government has given 50.4 million hectares, or 38.4 percent of Indonesia’s forests, to various companies across the archipelago.

Years of Living Dangerously, a documentary that tells the story of climate change, and includes participation from Arnold Schwarzenegger and Matt Damon, will be released in April next year. It documents various climate change-related issues across Asia.

Originally published at UCAnews on 11 September 2013. Used with permission. All other rights reserved.