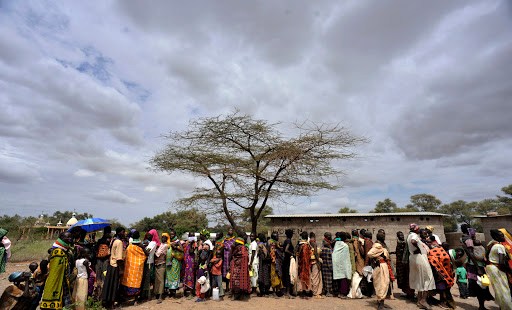 This could mean a drastic improvement in the standard of living for countless Kenyans living in poverty along the arid northern terrain.

The desert-dry region of Nairobi, Kenya, has struck upon water, a precious resource in its parched and arid terrain.

Both Kenyan officials and the United Nations stated on Wednesday that two aquifers (natural underground water reserves) have been uncovered by satellite exploration technology in the region of Turkana.

The amazing discovery was made by a special “groundwater mapping project” called GRIDMAP (Groundwater Resources Investigation for Drought Mitigation in Africa Programme), headed by UNESCO – United Nations Educational, Scientific and Cultural Organisation – in partnership with the Kenyan government.

After strategic drilling being carried out by the UNESCO team, the existence of the two reserves was verified. However further investigation is still needed to determine their exact size, as well as the quality of the water.

According to UNESCO however, they have a potentially enormous supply of water on their hands, which would drastically improve the lives of countless families and communities currently living in poverty throughout the tough northern territory of Kenya.

According to the UN report, 17 out of 41 million Kenyan citizens do not have access to safe water and 28 million lack basic sanitation.

One of the aquifers in particular which is located to the west of the largest permanent desert lake in the world (Lake Turkana), could, by itself “potentially increase Kenya’s strategic water reserves” explains UNESCO. “The smaller Lodwar Basin Aquifer could serve as a strategic reserve for the development of Lodwar, the capital of Turkana County, provided the reserve is confirmed” it adds.

GRIDMAP technology has also located a further three aquifers in the region of Turkana, which have yet to be verified by drilling.

In the opening session of the UNESCO Strategy and High-Level Meeting on Water Security and Cooperation, Kenyan Secretary for the Environment, Judi Wakhungu, emphasised how this was a vital scientific breakthrough for Kenya.

“The news about these water reserves comes at a time when reliable water supplies are highly needed” she said. “This newly found wealth of water opens a door to a more prosperous future for the people of Turkana and the nation as a whole.  We must now work to further explore these resources responsibly and safeguard them for future generations.”

Gretchen Kalonji, UNESCO’s Assistant Director-General for Natural Sciences, stated that  “UNESCO is proud to be a part of this important finding, which clearly demonstrates how science and technology can contribute to industrialization and economic growth, and to resolving real societal issues like access to water.”

“It is indeed in line with UNESCO’s vision for science for sustainable development and we will continue to support Africa to unlock the full potential of its invisible water wealth” she added.

Kenya’s government has communicated that it will launch a “national groundwater mapping programme.”

The project will be carried out in collaboration with UNESCO, who will help local governments to determine and analyse any underground resources within their jurisdictions.