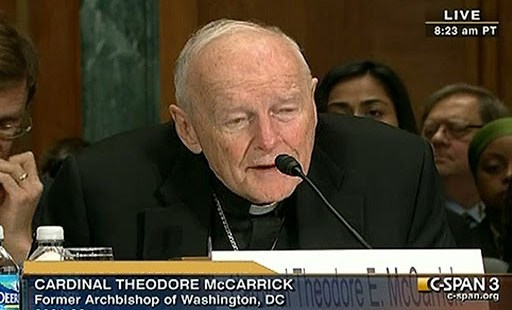 In his opening address at Washington D.C. conference, His Eminence Theodore McCarrick speaks out against sectarian violence.

Lasting peace in the Holy Land and throughout the Middle East requires respect for human rights, including a vigorous freedom of religion, said Cardinal Theodore E. McCarrick, retired Archbishop of Washington, D.C.

Cardinal McCarrick delivered the opening address at a Washington D.C. conference entitled “Religious Freedom and Human Rights: Path to Peace in the Holy Land — That All May Be Free.”

The conference was held at the Catholic University of America and co-sponsored by the university, the U.S. Conference of Catholic Bishops and Catholic Relief Services.

The cardinal spoke after recently returning from an early September trip to Jordan and the Syrian border. During his time as archbishop of Washington, Cardinal McCarrick has worked on religious freedom issues around the world, and since his retirement, he has been a counselor for the Center for Strategic and International Studies.

In his talk, he explained that any long-term peace solution in the Middle East would require four parts: human rights, religious freedom, an agreement on the Holy Land and creating a “path to peace.”

There is a widespread agreement about some human rights, such as “the right to leave your country in order to find opportunities for yourself and your children,” the cardinal observed.

However, there is also a “right to stay where you were born,” he said. “People forget that. That's a human right, too.”

In addition, Cardinal McCarrick highlighted the need for a robust freedom of religion.

“We're not just talking about having a church or doing what it is you want to do in a church,” he said, “but to live your faith, to proclaim your own message, to proclaim who you are.”

Pointing to examples of religious freedom restrictions and dwindling numbers of Christians in many parts of the Middle East, the cardinal observed that Pakistan’s strictly interpreted blasphemy laws may already be creating martyrs.

Addressing tensions between Israel and Palestine, Cardinal McCarrick criticized both violence by Palestinian actors and settlement expansion by the Israelis.

He said that while a new wave of violent uprising by the Palestinians would present “one of the greatest blows to peace and freedom in the Holy Land,” the expansion of Israeli settlements into occupied territories also “provokes violence” and is “dangerous.”

The cardinal added that along with most other faith leaders, he believes a two-state solution to be the best resolution to the continued tensions.

“What we don't know is how many people will lose their lives before this happens,” he lamented.

Originally published at Catholic News Agency on 11 September 2013. Used with permission. All other rights reserved.