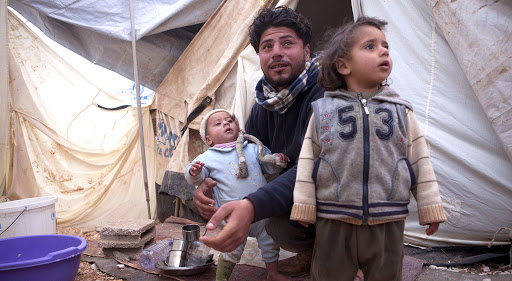 Fleeing from the violent and desolate conditions of civil war, thousands of families have found aid with Catholic organisations working out of surrounding countries.

Unable to enter refugee camps run by the United Nations, many Syrians fleeing from violence in their home country have found basic necessities and ongoing support from Catholic Relief Services in nearby Lebanon.

“When they come, they have nothing,” said Joan Rosenhauer, who serves as Catholic Relief Services’ executive vice president for U.S. Operations.

“You can hardly imagine what it’s like as a parent to go through this with your children,” she told CNA in a Sept. 9 interview, reflecting that the immensity of the refugee crisis “really strikes you when you see all the women and children” in the camps.

According to the United Nations, more than two million Syrians have fled the country, which has been entangled in a violent civil war for more than two years. In addition, more than four million people are estimated to be internally displaced as a result of the fighting.

Ongoing discussions of possible Western military intervention in the country have brought the Syrian crisis to the headlines in recent weeks, after reports of chemical weapon use against civilians outside of Damascus.

However, Rosenhauer warned that the plight of the refugees “can often get lost in this whole debate” over foreign policy.

She explained that “when people come, they’re often fleeing shelling” from bombing operations in Syria, and they frequently “just grab their children and run” across the border into neighboring countries, including Jordan, Lebanon, Turkey and Iraq.

Many people “are there with nothing,” she explained. “Because they often leave without their identification, they often can’t even get into a U.N. system.”

Many of those who cannot enter a U.N. refugee camp end up at informal sites, such as the ones in Lebanon administered by Catholic Relief Services, in conjunction with Caritas Lebanon.

Rosenhauer has visited some of these camps, where the international Catholic agencies work to get basic necessities to those in need, who are about 70 percent women and children.

These informal refugee camps do not receive official government aid, she explained. Rather, they are able to exist because “people find a person who is generous enough to give them land in the Beqaa Valley, and they start collecting whatever they can.”

“We try to get them some basic things like a cooking pot, some basic food, some cleaning supplies, blankets, some tarps,” she said.

Basic medical care and counseling are also important for refugees.

“They’ve lived through being in the middle of warfare, and then being scooped up and having to cross mountains overnight,” facing psychological trauma and a disruption of their lives, Rosenhauer observed.

“In some of the camps we’re trying to create a place where children can basically get counseling and…work through the trauma,” she said, and “one of the next steps is making sure children who have been displaced have access to schooling.”

As the conflict continues, the refugees will continue to need support, Rosenhauer stressed.

“People originally left their homes thinking it’s a short-term thing, and now they’re realizing it’s not going to be, and they don’t even know what the new normal can be,” she said. “Everything is only going to be worse if there are not resources to keep people living in at least the most basic of situations.”

Rosenhauer encouraged prayer for those fleeing, as well as those who are still in Syria. She also stressed the importance of educating people “about the situation with the refugees and the enormity of this problem.”

Most of all, she said, it is important to ensure “when we’re talking about Syria that the humanitarian crisis doesn’t get lost.”

Originally published at Catholic News Agency on 10 September 2013. Used with permission. All other rights reserved.