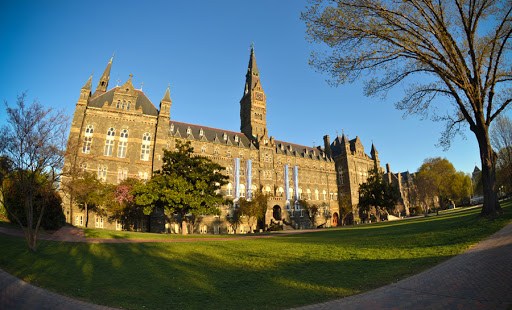 A canon law petition filed by Georgetown University alumni, students, parents and faculty is seeking a remedy to the university’s weak Catholic identity.

That’s the testimony of a student in the canon law petition filed in the Archdiocese of Washington by author William Peter Blatty and Georgetown University alumni, students, parents and faculty, seeking a remedy to Georgetown’s weak Catholic identity.

Fellow petitioner and Georgetown alumnus Manuel Miranda, who recently made a trip to Rome with the goal of increasing awareness of the case in the Vatican, supplied Aleteia News with stunning testimony from students, former students and even a professor.

The student cited above reportedly said, “Last year’s dorm tours for accepted students, who were deciding if they wanted to attend Georgetown, featured a dorm with pro-choice and Planned Parenthood paraphernalia plastered all over the door and walls. Condoms were taped to the door.”

“My Catholic lifestyle and convictions were sometimes attacked by student organizations and staff members, themselves underpinned by tacit and even explicit University endorsement. Far beyond nuanced scrutiny or respectful debate, my convictions, especially those regarding the dignity of human life, were instead the subject of sweeping condemnation, even at University-sponsored events. …I sometimes felt betrayed by a campus culture which discouraged faithfulness, even while banners everywhere touted the ideal of ‘faith in action.’”

“I have taught at Georgetown for many years. During this time, I have seen the influence of the Catholic Church decrease and secular humanism rise. I find this very disturbing. I have seen the number of times that prayer has been offered in official ceremonies decrease. I have seen pro-abortion groups become louder and louder…
“I have seen the LGBTQ interest group become institutionalized and its members not just be accepted and loved (as they should be), but strengthened in their convictions and vocal in pushing their unhealthy agenda. A ‘Lavender Prom’ was the latest evidence of this, where they were recognized and applauded by the rest of the university. It seems whomever we take money from sets the agenda for Georgetown, no longer the Catholic Church. …This is a sad development, and I long for the Georgetown I came to love years ago.”

The petition is currently under consideration by Cardinal Donald Wuerl, Archbishop of Washington.