Leaders Call for Prayer in Response to Deadly DC Shooting 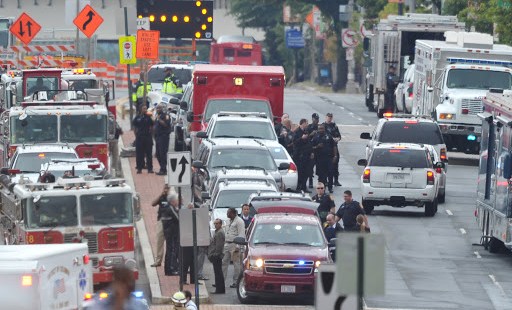 U.S. leaders are offering prayers for the nation following a shooting at the Navy Yard in southeast Washington, D.C., that left 13 dead and about a dozen more injured.

“I join people of all faiths across our community in praying for the people killed and wounded in the attack at the Navy Yard in Washington, D.C,” said Cardinal Donald W. Wuerl, adding that he is also praying for first responders and for family and friends of the victims.

“While many facts are still unknown, our most powerful tool right now is prayer,” the Washington cardinal said in a Sept. 16 statement. “The Church always calls us to prayer, particularly in moments of crisis. It is what we do best because it is what the Lord asks us to do.”

At about 8:20 a.m. on Sept. 16, numerous shots were fired at the D.C. facility, which contains the headquarters of the Naval Sea Systems Command.

Washington D.C. Police Chief Cathy Lanier confirmed that at least 13 people were killed in the shooting, including one shooting suspect, identified by the FBI as 34-year-old Aaron Alexis, a military contractor from Texas. Authorities are asking the public for help in finding more information on Alexis and the shooting.

Police initially said that they were looking for two more potential suspects, but later said they had found and cleared one of the individuals, leaving the other possible suspect at large.

Washington Mayor Vincent Gray told reporters that the motive for the shooting is unclear.

The base and surrounding public schools were placed on lockdown for several hours, according to the Department of the Navy and D.C. city officials.

As the nation confronts “yet another mass shooting,” President Barack Obama said in a Sept. 16 press conference, “we send our thoughts and prayers to all at the Navy Yard who’ve been touched by this tragedy.”

“We thank them for their service. We stand with the families of those who’ve been harmed. They’re going to need our love and support.”

The president said authorities are investigating the shooting in order to “make sure whoever carried out this cowardly act is held responsible” and prevent similar acts of violence.

Military Archbishop Timothy M. Broglio said he was “shocked and deeply saddened” by the news.

Noting that he has “often visited and celebrated the Eucharist” at the base's chapel, he added that he “prayed for the victims, the wounded, and their families at the noon Mass at the Archdiocesan Pastoral Center.”

Archbishop Broglio urged society to “restore the notion of respect for life into the fabric of the Nation,” in order to prevent such acts in the future.

“When the uniqueness of the human person created in the image and likeness of God is universally recognized, the possibility of a mass shooting is more remote,” he said.

Originally published at Catholic News Agency on 16 September 2013. Used with permission. All other rights reserved.