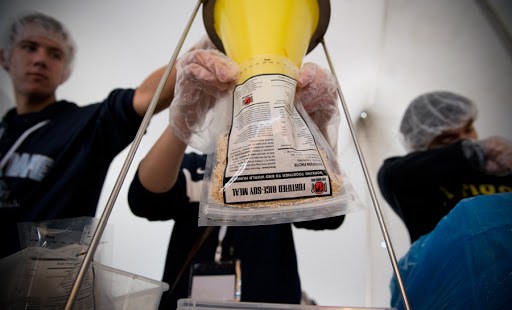 U.S. bishops have reaffirmed their support for Catholic Relief Services, applauding its “very strong training program” and “careful” vetting process for partnerships with other groups.

Following criticism of Catholic Relief Services, the U.S. bishops have reaffirmed their support for the agency, applauding its “very strong training program” and “careful” vetting process for partnerships with other groups.

“Through CRS, the Catholic Church in the United States helps the poorest of the poor around the world in response to the call of the Gospel, based on the teachings of the Church and following the example of our Holy Father. Its service around the world makes us all proud,” the administrative committee of the U.S. bishops’ conference said Sept. 11.

The relief agency works in 91 countries and has nearly 5,000 staff, many of whom are local workers who are not Catholic.

They also observed that the relief agency employs a vetting process to ensure that it does not violate Church teaching when cooperating with other groups or governments. Such partnerships are undertaken in order to accomplish joint goals, such as helping to provide food and clean water, disaster aid, education, anti-malaria campaigns and other poverty assistance initiatives.

“As CRS’ work necessitates collaboration with a broad network of partners in complex environments with a regularly changing focus, this system is constantly reviewed and updated,” the bishops said. “The agency welcomes questions and concerns offered in a spirit of Christian charity. If any weaknesses or problems are found assessment and action are undertaken to correct the problem.”

The U.S. bishops have said that Catholic Relief Services “fully and faithfully adheres to Church teaching” and those concerned about criticisms of the agency should seek clarification before believing them.

The bishops lamented recent allegations that the agency does not adhere to Church teaching, saying there have been “thorough investigations into the concerns.”

The statement comes after the Virginia-based Population Research Institute claimed that the relief agency was cooperating in a contraceptive distribution program in Madagascar, in violation of Catholic teaching.

The institute on July 26 charged that Catholic Relief Services was acting “in concert with some of the world’s biggest population control / family planning organizations” and said it distributed contraceptives and drugs that can cause early abortions. The institute cited its interviews with local bishops, clergy, and relief workers, conducted in late 2012.

The U.S. bishops reacted to the initial report by contacting Madagascar bishops.

Archbishop Désiré Tsarahazana of Toamasina said that there had been some confusion in his archdiocese about the work of Catholic Relief Services, the U.S. bishops reported in early August. He confirmed that the agency has been acting according to Catholic teaching.

Archbishop Odon Razanakolona of Antananarivo told the U.S. bishops he was sure the relief agency follows Catholic teaching, describing the agency as a good partner.

Catholic Relief Services communications officials said that some reports about the relief agency confused the actions of its staffers with those of non-staff community health workers, who are chosen locally and are part of the Madagascar government’s health care system.

The Population Research Institute has stood by its claims, releasing its full report on Sept. 4, including transcripts of its 2012 interviews with Madagascar bishops and almost 40 other individuals.

Steven Mosher, the institute’s president, said Sept. 4 the organization conducted its investigation at the behest of several major CRS donors. In August, Mosher characterized the bishops’ response to the institute’s claims as “blanket denials.”

At the conclusion of the institute’s full report, Mosher and co-author Anne Roback Morse charged that Catholic Relief Services avoids “the appearance of favoring the Catholic Church in any way.” They said that the agency has a policy of not preferentially hiring Catholics and that this is because such a policy is required by its “principal donor,” the U.S. Agency for International Aid and Development.

They also criticized the relief agency for its policy of serving the poor throughout the world “on the basis of need not creed” rather than seeking to preferentially serve Catholics.

Mosher and Morse said that an “authentic Catholic charity” would “hire faithful Catholics” and while not turning away others in need, would “seek above all to serve its fellow Catholics.”

The U.S. bishops, however, praised the international work of Catholic Relief Services and stressed that the group’s present and past policy is “never to distribute or promote artificial contraceptives or abortifacients or to promote abortion.”

“We want to make it clear that those making these public critiques, albeit, we hope, in good faith, do not speak for the Catholic Church and we advise the Catholic faithful to exercise caution and consult the CRS website for clarification before endorsing or giving credence to the groups’ critiques,” the bishops said.

They urged continued support for the relief agency, saying it is committed to “defend human dignity and the sacredness of every human life from the moment of conception until natural death, and at every moment in between.”