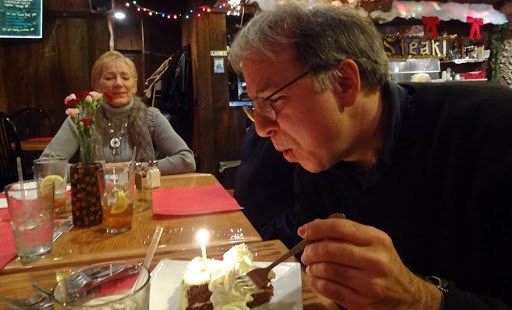 A writer and publisher at Orbis books, Robert Ellsberg got started in publishing (and found the Catholic faith) at a Catholic Worker House, where he was impacted personally by Dorothy Day in her final years.

I've always been a bookworm. After Vatican II, I consumed the paperbacks of the Doubleday Image Books series – philosophers like Newman, Maritain and Gilson; saints, mystics, and Doctors of the Church; and emerging authors in Catholic bible scholarship – all for either $1.49 or $1.99! They were printed on quality paper with beautiful colors. I discovered books by Eugene Kennedy (The People Are the Church; A Time for Love) and several years later studied under him at Loyola University of Chicago. What a privilege!

After becoming a psychologist, I wrote for Crossroad/Continuum and served as General Editor for a series of books on counseling. I learned a great deal from Michael Leach, the Dean of American Catholic Publishing. I’ve written a dense textbook for Prentice Hall/Pearson, in-print articles for America, and on-line pieces for National Review. I have always been fascinated by the powerful, undeveloped, and sometimes evolving nature of Catholic theology and its application to other fields of study.

Those with whom we share our life’s journey often point us in other inspiring directions. Eugene Kennedy has a long history of being a “Maryknoller”; Michael Leach served as Publisher and is now Editor-at-Large at Orbis Books. This is how my interest leads to Robert Ellsberg, award-winning author and publisher at Orbis. Their offices are on a stately hill above the Hudson, where Maryknoll Missionaries have prepared for worldwide service – and even martyrdom – for a century.

Here are my questions for Robert Ellsberg, who is one of the wisest voices in the Church in the 21st century:

Please describe the influence of the Catholic Worker Movement in your life.

In 1975, when I was nineteen, I dropped out of college and went to work at the Catholic Worker house in New York City, expecting to spend just a few months. I ended up staying five years. Those were the last years of Dorothy Day, the founder of the Catholic Worker, who died in 1980. After a few months, she asked me to serve as managing editor of the Catholic Worker paper. I guess you could say that she pointed me in the direction of my life’s work and vocation as a writer and editor – and, ironically, as her own editor. After her death, I went on to edit her selected writings, and twenty-five years later, her diaries and letters. I became a Catholic during my time there, and later went to study theology before ending up at Orbis Books. I really believe that everything I have done in my life has been an extension of what I learned and experienced during those years.

As an author, how has the topic of your books enriched your own faith, and what is your hope for others who read them?

The principal books I have written are All Saints, The Saints’ Guide to Happiness, and Blessed Among All Women. These books reflect my lifelong interest in looking at the lives of exemplary witnesses – artists, thinkers, visionaries – to help me orient my own way in life. Again, from Dorothy Day I acquired a fascination with the saints. But I was also influenced by her very eclectic list of heroes and witnesses. And that is reflected in my books, as well, in which I discuss official saints along with figures like Óscar Romero, Thomas Merton, Flannery O’Connor, and Gandhi. What is my hope for readers? That reading these stories will help these figures come alive for them as flesh and blood historical figures who struggled in their own time and place to be faithful. I also hope this will enlarge their own moral imaginations and enable them to think more creatively about the challenge to be faithful in our own historical context.

Please describe the Maryknoll order, its history, and its charism within the Church.

I work for Orbis Books, which is the publishing arm of the Maryknoll Fathers and Brothers – formally, the Catholic Foreign Mission Society of America. Maryknoll was founded in 1911 with the purpose of training priests and brothers for overseas missionary work – originally in China, but eventually throughout Asia, Africa and Latin America. One hundred years later, the Society still continues this work, bearing witness to the Gospel throughout the world. The understanding of mission has changed and evolved over that time, but the essential mission of Maryknoll remains the same – not to serve as the “mission department” of the U.S. Church, but as a leaven of mission consciousness that reminds all American Catholics that God has a mission in the world, to which all of us are called.

How does Maryknoll Publishing support and make known the traditions and current work of the Maryknoll order?

Orbis Books was founded in 1970. Its purpose was not to make known the traditions and work of Maryknoll, but to extend theological conversation by amplifying voices of Christians in what was then commonly called “The Third World.” We became known for publishing theology from Latin America, Africa, and Asia, primarily. This led us into theological themes that reflect the experience of Christians in these areas – the themes of social justice and the option for the poor (primarily via Latin America), religious pluralism (Asia), and inculturation (Africa). All of these are dimensions of mission, and by exploring these themes we extend the mission of Maryknoll. Our program today is much broader, including books on missiology, spirituality, ethics, ecology, and many other themes. We also publish books that explicitly reflect the work of Maryknoll.

Can you describe trends you have noticed in Catholic publishing (books and periodicals) since Vatican II?

There are many Catholic publishers that serve different niches in the Church. Some specialize in scholarly works, others on spirituality, catechetics and religious education, pastoral resources, or liturgical aids. It is difficult to generalize on trends. Catholic publishers are subject to many of the same trends that affect the wider publishing industry – the loss of bookstores, the change in reading habits, the growing switch to online purchasing and the use of electronic publishing.

What are some latent – perhaps unacknowledged but highly deserving – areas for examination in the Church, apart from the hot-button issues that sometimes seem to get the most publicity?

One of the most exciting areas for theological reflection today is in terms of the new scientific horizons that are opening up, as we begin to get a better sense of the immensity and mystery of the cosmos. Many theologians are finding that this has exciting implications for how we understand the Gospel message. At the same time, concern for ecology and the threat of climate change has yet to claim anything approaching the sense of urgency in Catholic teaching that it demands. The importance of this issue and its potential impact on human life demands far greater attention.

Might publishing be considered a ministry? What advice would you have for young people who would like to enter this field and focus on writing and communicating about the Faith?

When I became a Catholic and decided to study theology, I knew that I wanted to be of service to the mission of the Church in some way, but I didn't know how. I stumbled into publishing, and I have never regretted it. There is no doubt that publishing is an important ministry. It is a prophetic ministry – it involves discernment and a careful reading of the “signs of the times.” It involves discerning the spiritual needs of the day and finding authors who can speak to those needs, and helping to fashion their work so that their words effectively reach the widest possible audience. There is no doubt that a book remains an incredibly powerful instrument for changing lives when it comes into the right hands at the right time. And it is always inspiring to hear from readers who have felt the personal impact of a book I helped to publish. Dorothy Day always spoke of "clarification of thought" as one of the pillars of the Catholic Worker movement (along with houses of hospitality and farming communes). You might say that was the part of the program I most identified with. It is the path I have found to live out my faith, to serve God’s mission, and to make a difference.

Thank you, Robert Ellsberg, for conversing with Aleteia readers.