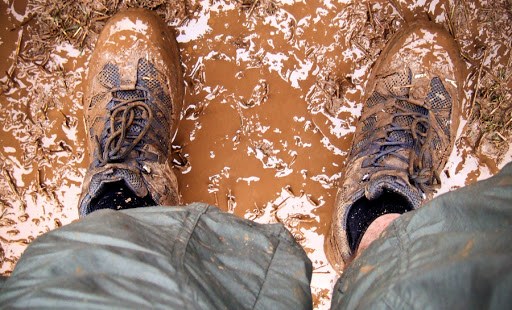 A group of seventh-graders and their chaperones on a leadership retreat forge a newfound respect for Mother Nature and a special connection to God, having witnessed firsthand Colorado’s “Flood of 2013.”

The 56 students and 11 dedicated adults inside, including school staff, parent chaperones and John Paul II Adventures Outdoor Lab staff, were not coming back from a victorious sporting event but have the rare distinction of surviving the “Flood of 2013.”

Inside, the grimy seventh-graders who trudged through muddy water to get to the buses made a long three-hour trip from Allenspark where they were evacuated Thursday from floods surrounding their cabins at High Peak Camp near Estes Park.

They forged a special connection to each other and a newfound respect for Mother Nature having witnessed firsthand the state’s epic rainfall that caused five confirmed deaths, turned highways into lakes, caused thousands to be evacuated and left thousands more homeless.

After only a few hours of sleep many of the seventh-graders who attended the leadership retreat were back at the school on Saturday afternoon to celebrate its annual fall festival. The students worked the booths to gain service hours in preparation for the sacrament of confirmation they will be receiving in the spring.

“We got to see God through nature even though it was a tough time,” said Luke K. Krukowski, 12. “We were safe so the hardest part was the other evacuated people at the camp who lost their homes in the flood.”

Classmates Jake Taylor, Luke Maxfield, Drew Renner and Billy Mottram agreed the adults kept the students calm but they knew the situation was serious when flooding near the camp was knee-deep. They saw portions of the highway washed away and sinkholes.

“We knew we were stuck there but at least we had our homes back in Denver,” said Luke Maxfield.

Savannah Viereck, 12, agreed. “We weren’t able to get home right away but many people now don’t have homes.”

Caroline McGrail and Annie Seier said the worst part of the ordeal was not being able to shower for several days. The students were supposed to return Thursday and most packed few clothes.

“When we drove up to the school and saw everyone cheering, it kind of felt like we won the Super Bowl,” McGrail joked.

Anxious parents in Denver were informed throughout the ordeal that their children were safe, warm, and had food and supervision. However, that communication was not instant or easy because the stormy weather interfered with the adults getting phone or Internet access to update school Principal Sister Maria Ivana Begovic, O.P., who in turn shared that information with parents.

“No one ever doubted that the children were safe and in good hands,” the Dominican sister said. “But some parents wanted reassurance because they couldn’t hear their child’s voice or see a photo. There were no phone landlines working or cell phones. It was an opportunity for everyone, including me, to trust in the Lord.”

Once the children were safe, everyone was able to reflect on the important impact of the trip, she said.

“It is very powerful that this was a Catholic leadership retreat and our seventh-graders experienced it on a whole different level,” Sister Begovic said. “Individuals were working behind the scenes to get them home safely and the Lord provided us in abundance with examples of Christian leadership.”

Assistant Principal Heather Grams, who students called “their hero,” accompanied by Sandy Harem, director of John Paul II Adventures leadership program, hiked throughout the area to find Internet connection and working phone lines. Harem, along with her dedicated staff, also stayed with the children until they were rescued even though they could have gone home.

“In this day of kids having cell phones and immediate access, it was particularly hard for this generation,” said parent chaperone Lynn Tartell, who made the trip with her daughter, Sarah, 12.

Tartell’s husband, Joe, and their older daughter, Megan, a Regis Jesuit High School student, considered driving to the camp but heeded Sister Begovic’s request to trust they would get the group home safely.

“I was texting my husband and in the middle of the text we lost the connection,” Lynn Tartell said. “We had no communication for a day and that was very hard on him. He was up all night worrying about us.”

Megan Tartell said they stopped watching the television reports because it was causing them too much anxiety.

The group left Denver on Wednesday when the rain was steady but light. This is the first year the seventh-graders took the leadership retreat. A group of eighth-graders were at the camp earlier in the week and left before the storm.

On Wednesday evening, Sarah Tartell said some of her classmates felt a special connection to God when they were praying.

“It started to pour rain and it was so pretty,” she recalled. “The girls were singing their hearts out.”

But the next morning the group awoke to high water around the cabins and an issue about power at the camp. Grams and the other adults agreed with the option to carpool the group to higher ground at the Highland Presbyterian Camp in nearby Allenspark, which the Red Cross has used previously for shelters in times of crisis. The camp became a makeshift shelter but Red Cross officials could not get there because of washed out roads.

Tartell said the chaperones drove the students to the new location with music playing on the car radios because they didn’t want to alarm the students. But once the adults were alone they tuned the radio to KOA and understood the severity of the situation.

The adults were able to keep the students positive and in good spirits, despite a challenging situation. An older group of visitors already staying at the camp were quilters and taught some of the students how to quilt. The students also played a game they dubbed, “Survivor: The Flood” based on the Biblical characters of Noah, David and Jonah. They hiked, sang songs, and recited the rosary.

“We read through James Chapter I on trials, perseverance, and the rewards of enduring challenges in order to grow in faith,” Grams wrote in an email to parents.

Several area residents evacuated to the camp engaged the students in conversations.

“Many of them already knew their homes were destroyed but they were so thrilled they just got out with their dogs and other animals,” Lynn Tartell said. “Our kids really understand that kind of loss now.”

The students said the experience brought them closer together as a class.

“When we first got there, there were three groups of girls visiting together,” Sarah said. “But when we all ended up sleeping in the dining room together, we stayed up most of the night talking and learning a lot more about each other.”

Early Friday, when the heavy rain finally subsided, the group went outside and sat together in quiet prayer.

“We finally could see the mountains,” Lynn Tartell said. “We all listened and talked to God.”

The group knew they needed to leave when the buses were available Friday evening because another storm was being predicted, which could have further delayed their return and compromised safe travel. They arrived home to teary-eyed parents, clapping siblings and the ultimate celebration meal: pizza.