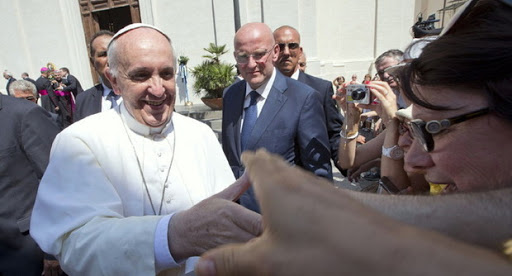 The interview was long and deep, and covered much more than how the Church should approach abortion and homosexuality. He also quoted poetry from memory, named his favorite movie – and revealed himself as a man of great culture.

The media can't stop talking about Pope Francis' comments on abortion, contraception, and homosexuality (which, ironically, he said we shouldn't focus on exclusively), but the +12,000 word interview touched on much more than that. In addition to discussing the Second Vatican Council, the role of women in the Church, the prophetic nature of the religious life, and exhorting the Church to better preach the Gospel, Pope Francis also told us more about himself.

What's revealed is an incredibly cultured man who can quote his favorite poetry from memory, has a deep appreciation of classical music, and names a movie released in 1954 as his favorite.

Here are six things we learned about the man Pope Francis we didn't know before:

1) His favorite authors, and the book he's currently reading

“I have really loved a diverse array of authors. I love very much Dostoevsky and Hölderlin. I remember Hölderlin for that poem written for the birthday of his grandmother that is very beautiful and was spiritually very enriching for me. The poem ends with the verse, ‘May the man hold fast to what the child has promised.’ I was also impressed because I loved my grandmother Rosa, and in that poem Hölderlin compares his grandmother to the Virgin Mary, who gave birth to Jesus, the friend of the earth who did not consider anybody a foreigner.

"I have read The Betrothed, by Alessandro Manzoni, three times, and I have it now on my table because I want to read it again. Manzoni gave me so much. When I was a child, my grandmother taught me by heart the beginning of The Betrothed: ‘That branch of Lake Como that turns off to the south between two unbroken chains of mountains….’ I also liked Gerard Manley Hopkins very much."

"I often visited the Church of St. Louis of France, and I went there to contemplate the painting of ‘The Calling of St. Matthew,’ by Caravaggio. “That finger of Jesus, pointing at Matthew. That’s me. I feel like him. Like Matthew.” Here the pope becomes determined, as if he had finally found the image he was looking for: “It is the gesture of Matthew that strikes me: he holds on to his money as if to say, ‘No, not me! No, this money is mine.’ Here, this is me, a sinner on whom the Lord has turned his gaze. […]

“Among the great painters, I admire Caravaggio; his paintings speak to me. But also Chagall, with his ‘White Crucifixion.’"

3) His taste in music

"Among musicians I love Mozart, of course. The ‘Et incarnatus est’ from his Mass in C minor is matchless; it lifts you to God! I love Mozart performed by Clara Haskil. Mozart fulfils me. But I cannot think about his music; I have to listen to it. I like listening to Beethoven, but in a Promethean way, and the most Promethean interpreter for me is Furtwängler. And then Bach’s Passions. The piece by Bach that I love so much is the ‘Erbarme Dich,’ the tears of Peter in the ‘St. Matthew Passion.’ Sublime. Then, at a different level, not intimate in the same way, I love Wagner. I like to listen to him, but not all the time. The performance of Wagner’s ‘Ring’ by Furtwängler at La Scala in Milan in 1950 is for me the best. But also the ‘Parsifal’ by Knappertsbusch in 1962."

“We should also talk about the cinema. ‘La Strada,’ by Fellini, is the movie that perhaps I loved the most. I identify with this movie, in which there is an implicit reference to St. Francis. I also believe that I watched all of the Italian movies with Anna Magnani and Aldo Fabrizi when I was between 10 and 12 years old. Another film that I loved is ‘Rome, Open City.’ I owe my film culture especially to my parents who used to take us to the movies quite often."

5) His love of "tragic artists"

“Anyway, in general I love tragic artists, especially classical ones. There is a nice definition that Cervantes puts on the lips of the bachelor Carrasco to praise the story of Don Quixote: ‘Children have it in their hands, young people read it, adults understand it, the elderly praise it.’ For me this can be a good definition of the classics.”

6) His routine for prayer

"I pray the breviary every morning. I like to pray with the psalms. Then, later, I celebrate Mass. I pray the Rosary. What I really prefer is adoration in the evening, even when I get distracted and think of other things, or even fall asleep praying. In the evening then, between seven and eight o’clock, I stay in front of the Blessed Sacrament for an hour in adoration. But I pray mentally even when I am waiting at the dentist or at other times of the day."