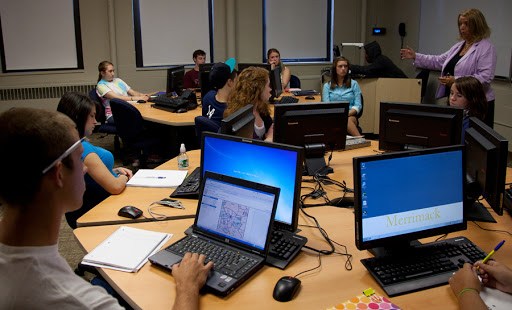 A Catholic theology professor is calling on Catholic colleges to take a principled stand against Massive Open Online Courses (MOOCs).

A Catholic theology professor is calling on Catholic colleges to take a principled stand against Massive Open Online Courses (MOOCs) in order to “reassert the belief that education is a moral enterprise that develops human dignity and promotes social justice.”

Whereas MOOCs have been popular among large and prestigious colleges, Georgetown University is the only Catholic college known to have contracted with leading tech companies to provide MOOCs.

Jonathan Malesic, an associate professor of theology at King's College in Wilkes-Barre, Penn., writes in the Chronicle of Higher Education that MOOCs not only fail to accomplish the goals of Catholic education but also undermine them. If large Catholic universities implement MOOCs, Malesic warns, it could result in pushing smaller Catholic colleges out of business, thereby weakening Catholic higher education as a whole.

He also warns against further “depersonalization” in Catholic education. “To educate anyone fully—addressing their moral and spiritual development as well as their intellect—teachers and students must be present to each other,” he writes.

Malesic does admit that MOOCS could offer access to college-level instruction for the poor or those who live in areas too remote to attend college. “But the altruistic promise of MOOCs has been empty so far,” he writes, noting that MOOCs have thus far been mostly used for continuing education by those who already possess degrees.

“If, in a few decades, the number of Catholic colleges in the United States amounts to only a handful of mega-universities, with most students taking classes online, in physical isolation from their professors and peers, then the project of Catholic higher education will have failed. Not only will it have abandoned personal and local education, but it will have elevated the market principles of competition and consolidation above the Catholic social-justice principles of solidarity (making decisions that benefit the common good) and subsidiarity (making decisions at the lowest and most local possible level).
“Once Catholic colleges distinguish themselves from the MOOC-addled crowd by making this appeal to their tradition's moral principles (and once they persuade Georgetown to give up its MOOCs), they need to put those principles into action. They need to make sure that they really do educate the whole person—with faculty who embody what it means to be an educated person. They must also treat their employees, especially their highly vulnerable contingent faculty, like the sources of value they really are.”

Malesic is not adverse to making provocative arguments. In his 2009 book, Secret Faith in the Public Square: An Argument for the Concealment of Christian Identity, Malesic urges Christians to live their faith without drawing attention to it. With particular attention to politics and other high-profile occupations, he argues that one’s Christianity should not be used as a label and should be a highly private matter.