Pope Francis the Sinner: Why he Preaches Love Above All 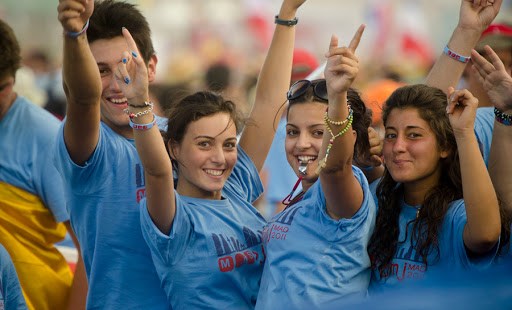 If you want to get to know the real Francis then don’t listen to sensationalist headlines, go directly to the good stuff.

In Brazil Pope Francis encouraged the young people to return to their parishes and dioceses and “make a mess”. What he meant was for them to roll up their sleeves, get involved and start living the radical gospel of Jesus Christ even if it meant turning over a few tables and upsetting preconceived expectations.

They can follow the Pope’s own example. His interview with Jesuit editor Rev. Antonio Spadaro, the editor of La Civilta Cattolica will probably succeed in making a mess for some in the church. Members of the secular press have already managed to squeeze sensational headlines out of the interview. London’s Daily Telegraph headlines “Catholic Church Could Fall Like House of Cards” while CBS online says,  “Church Must Look Past Small Minded Rules” CNN Screams, “Pope Says I Am a Sinner” while the BBC misleads its readers with a first paragraph, “Pope Francis has said the Catholic Church is too focused on preaching about abortion, gay people and contraception.”

Readers should take time to peruse the whole interview with Pope Francis. The English translation can be found here. The most important thing about the interview is that it gives us, for the first time, an in depth exposition of what Pope Francis really thinks about the church, himself, and his role as the Bishop of Rome. The first thing that comes across is his simplicity, humility and his need to be with people and put people first. He clearly loves people, thinks the best of them and is passionate about seeing God at work in each person’s life.

Some people have observed that Pope John Paul II gave us hope, Pope Benedict XVI gave us faith and Pope Francis give us love. If so, then, as anyone who loves will agree–love is messy. This is why Pope Francis emphasizes a leadership style that is consultative and a ministry style that is one of outreach and compassion. In a key passage of the interview he says, “the thing the church needs most today is the ability to heal wounds and to warm the hearts of the faithful; it needs nearness, proximity. I see the church as a field hospital after battle. It is useless to ask a seriously injured person if he has high cholesterol and about the level of his blood sugars! You have to heal his wounds. Then we can talk about everything else. Heal the wounds, heal the wounds…. And you have to start from the ground up.”

The secular reporters will focus on Pope Francis’ words saying that the Catholic Church needs to move beyond petty rules and regulations. A close reading of the interview shows that the Pope is concerned about a hierarchy of truth. Some rules and regulations are more important than others, and above them all is the great rule of love. The Church is there to do the work of Christ who came to seek and to save those who were lost.

Pope Francis admits that this is a risky and messy business. Without setting aside any Catholic truths he sees that it is wrong to take false refuge in a religion that is nothing but rules and regulations. The church in the modern age is facing great challenges, but it would be a mistake to hunker down and put one’s head in the sand looking for some kind of return to a nostalgic age. So Pope Francis affirms, “If the Christian is a restorationist, a legalist, if he wants everything clear and safe, then he will find nothing. Tradition and memory of the past must help us to have the courage to open up new areas to God. Those who today always look for disciplinarian solutions, those who long for an exaggerated doctrinal ‘security,’ those who stubbornly try to recover a past that no longer exists­—they have a static and inward-directed view of things. In this way, faith becomes an ideology among other ideologies. “

When talking about his identity as a Jesuit he affirms that members of the religious orders have a prophetic aspect to their calling. Within the whole mystery of the church they are the ones who have traditionally stepped outside the box, been courageous pioneers and moved the church into dangerous new territory. This process is always risky and uncertain, and errors are inevitably made. Pope Francis thinks it is worth the risk.