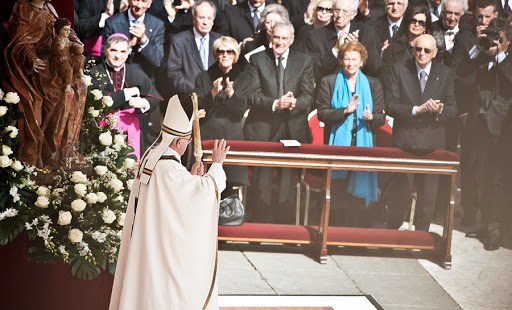 Pope Francis was right (and unoriginal) when he said Catholics must make preaching Christ their first task and instruction on morality their second. But that certainly doesn’t mean Catholics should stop talking about morality.

Pope Francis’s recently published interview has caused quite a stir.  Really, though, it shouldn’t have; out of about 12,000 words, the mainstream media has chosen (not surprisingly) to focus on only about a hundred.  Dissident “Catholic” groups are calling these hundred words “refreshing,” describing them as a change in direction for the Church.  The voices in the media, in politics, and in politicized Catholicism are describing this interview as a softening of Church teaching on “controversial” issues, and a new tolerance for a broader definition of orthodoxy that can only mean a call to the bishops of the United States to tone down their rhetoric in trying to correct renegade Catholic politicians – those who oppose the Church’s moral teachings on abortion, contraception, and homosexuality as they thumb their noses at the Magisterium and tell them to violate their consciences or risk the wrath of the State.

Problem solved, say the pundits: Pope Francis told them it doesn’t matter anymore.  They should move on and get used to the new normal.

Not so fast.  In this very same interview, Francis says the moral teachings of the Church are “clear” and that, for his own part, he’s “a son of the Church.”  As a theologian, I can tell you what Francis means: “Of course I accept these teachings, and they’re obvious to anyone who’s been paying attention.”  This is the reason he doesn’t think they need to be discussed “all the time.”  He’s saying, “By the way, it’s not like these issues are controversial.  Everyone knows what the Church teaches about these things, and everyone knows those teachings aren’t ever going to change.”

But Francis is also expressing a valid concern about how we present the Church’s moral teachings.  It’s actually the same concern previously expressed by all Popes since at least the time of Pius XII.  He wants the world to know the positive content of the Christian Faith, not just the negative implications of it.  It simply isn’t true that Christianity is just the religion of “No!” – it’s the religion of an exuberant and uncompromising “Yes!”  It’s the religion of God’s love for the world, and his will that human beings find a path to freedom and life in Jesus Christ.  Christianity is the religion that says, in all ways and in every circumstance, life is more powerful than death, mercy is more powerful than sin, and love is more powerful than hatred, because, from the very beginning, God loves the whole universe, and each and every person in it, into being.  It’s the religion that stands against sin, not simply because God hates it, but because God loves the person sin destroys.  So the first truth is not that “this is wrong,” but that “God loves you,” and it’s for this reason that the sin is wrong: because it turns away love.

Now, the pundits are saying that the bishops have been harping too much on the negative – abortion, contraception, homosexuality – all of it “anti-, anti-, anti-. . . .”  But if we’re being honest, how many Catholics can really remember the last time they heard a homily at a Sunday Mass on any of these issues?  If anything, the Church in the United States has come under heavy criticism for not preaching on these issues enough – for allowing the average Catholic in the pew to wonder how serious the Church really is about these things when hardly a mention of them ever finds its way to their ears from the pulpit, and Catholic politicians receive communion openly after mandating with the coercive power of the sword that Catholics, regardless of the constant and “clear” (that’s what Francis called it, remember) teaching of the Church, fork over the money to pay for other people’s abortions.  The truth is that priests who dare to deliver the hard sayings on these issues pay a heavy personal price for it, as prophets always have when they’ve told the people what they didn’t want to hear precisely because they needed to hear it.