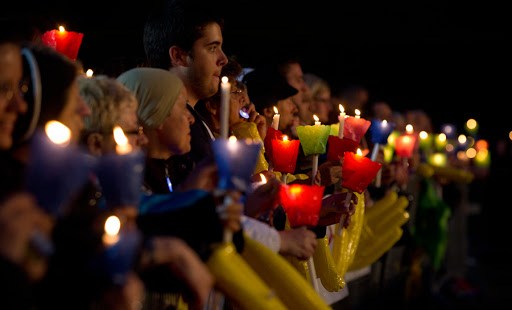 During his latest general audience, Pope Francis drew attention to the rich diversity within the universal Church, encouraging such differences as a sign of unity.

Today during his general audience, Pope Francis drew attention to the rich diversity within the universal Church, saying that such differences are in fact a sign of unity.

“Dear Brothers and Sisters: in the Creed, we confess that the Church is 'one.' When we consider the rich diversity of languages, cultures and peoples present in the Church throughout the world, we realize that this unity is a God-given gift,” the Pope told pilgrims in St. Peter's Square on Sept. 25 .

“In effect, the Church is one and it is in that same unity, even though it is dispersed throughout the world and there are many diversities.”

Pope Francis highlighted his recent trip to Rio de Janeiro for the gathering of youth during World Youth Day as a place where he experienced the paradigm of unity and diversity in the Church.

During the global event, the Pope recalled, there were “so many faces, so many languages, so many places of provenance, but just one Church.”

“Like a big family, united like brothers in one same faith and hope, in charity and in the sacraments, in the apostolic ministry instituted by Christ.”

Pope Francis then challenged the crowds, asking them “Do we live like that or are we closed up in ourselves or in our own group? Do we worry about others, even if they are far? Do we pray for them, especially for persecuted Christians?”

The Pope noted that there are times when tension and conflict arise, wounding the Church’s unity – but “it is we that provoke it” through our “chit-chat” and gossip.

A Christian, he said, should not speak badly about others, adding that it is good “that he first bites his tongue and then talks.”

“That is why we always need to encourage communion in all of the fields of life,” he said, so that we may “grow in the unity that God gives us, and also to promote the ecumenical journey.”

The pontiff also emphasized the importance of working within the Church to be models of faith, saying “The world needs our witness to God’s plan for the unity, reconciliation and peace of the whole human family.”

“Let us ask the Lord to enable us, and Christians everywhere, to work to overcome our tensions and divisions,” he said, “to strive, as Saint Paul bids us, to maintain the unity of the Spirit in the bond of peace, and to cherish the harmony which the same Spirit creates from the richness of our diversity.”

Pope Francis then expressed that this unity is not achieved through our own human efforts, but rather through the “work of the true artist, the Holy Spirit,” saying to those present that we must ask for the gift of unity “through perseverance in prayer.”