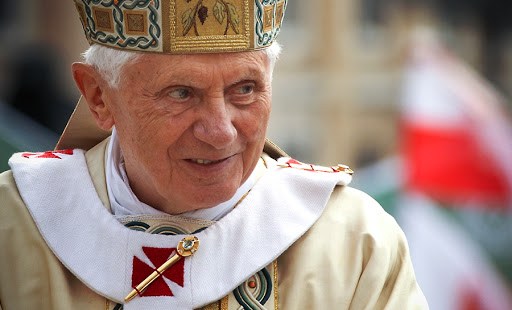 While the world was still digesting a wide-ranging interview with Pope Francis on Monday the Italian daily La Repubblica published excerpts from a letter Pope Emeritus Benedict XVI sent to a well-known atheist, the mathematician Piergiorgio Odifreddi – the Richard Dawkins of Italy.

Benedict was responding to a book Odifreddi wrote in 2011 titled, “Dear Pope, I’m Writing to You," says Rome correspondent Edward Pentin. The book is a critique of certain arguments and lines of thought found in Benedict’s theological writings, beginning with his 1967 volume Introduction to Christianity and including the book Jesus of Nazareth, which he wrote as Pope.

The extracts show Benedict as his usual gentlemanly, though frank, self, calmly weighing the popular writer’s claims and countering his exaggerations and omissions.

It was Odifreddi himself who decided to publish Benedict’s letter. Writing in La Repubblica on Monday he said that few people “can understand the surprise and excitement” you feel on receiving “an unexpected letter from a pope.” He said the letter was delivered on September 3, and he waited to publish it to make sure he had Benedict XVI’s permission. The depth of his answer was “beyond reasonable hopes,” Odifreddi said, and he was particularly surprised that Benedict read his book from cover to cover and wanted to discuss it, as it had been billed as a “luciferian introduction to atheism.”

Odifreddi said the entire 11-page letter will be included in a new edition of his book. He said that he and Benedict may disagree on almost everything, but they have “united in at least one common goal: the search for the Truth, with a capital ‘T.’”

(…) I would like to thank you for your very detailed critique of my books, and similarly aspects of my faith. Such an endeavour is largely what I meant by my address to the Roman Curia on the occasion of Christmas 2009. I have to thank you very much for the way you faithfully followed my text, seeking earnestly to do it justice.

My opinion about your book as a whole, however, is itself rather mixed. I read some parts with enjoyment and profit. In other parts, however, I was taken aback by the aggressiveness and rash nature of your argument.(…)

Several times you pointed out to me that theology must be science fiction. In this respect, I'm surprised that you still feel my book worthy of discussion. Let me make four points in relation to this issue:

1. Is it fair to say that "science" in the strictest sense of the word is just math? I learned from you that, even here, the distinction should be made between arithmetic and geometry. In all the specific scientific subjects each one has its own form, according to the particularity of its object. It is essential that you apply a verifiable method, which excludes arbitrariness and ensures rationality in their different ways.

2. You should at least recognize that, in history and in philosophical thought, theology has produced lasting results.

3. An important function of theology is to keep religion tied to reason and reason to religion. Both functions are of paramount importance for humanity. In my dialogue with [sociologist Jurgen] Habermas I have shown that there are pathologies of religion and — no less dangerous — pathologies of reason. Religion and reason need each other, and to keep them constantly connected is an important task of theology.

4. Science fiction exists, moreover, in the context of many sciences. What it offers are theories about the beginning and the end of the world as found in Heisenberg, Schrödinger and others. I would designate such works as science fiction in the best sense: they are visions which anticipate true knowledge, although they are, in fact, only imaginative attempts to get closer to reality.

There is, however, science fiction on a grand scale even within the theory of evolution. The Selfish Gene by Richard Dawkins is a classic example of science fiction.

The great [molecular biologist] Jacques Monod wrote some sentences which he has inserted in his works which could only be science fiction. I quote: "The emergence of tetrapod vertebrates … originates from the fact that a primitive fish ‘chose’ to go and explore the land, on which, however, it was unable to move except by jumping clumsily and thus creating, as a result of a modification of behaviour, the selective pressure leading to the development of the sturdy limbs of tetrapods. Among the descendants of this bold explorer, of this Magellan of evolution, some can run at a speed of 70 miles per hour … " (Quoted from the Italian edition of Chance and Necessity, Milan 2001, p. 117ff.).

On the issues discussed so far this is a serious dialogue, for which – as I have said repeatedly – I am grateful .

The situation is different in the chapter [of your book] on the priest and Catholic morality, and again in different parts of the chapters on Jesus.

As for what you say about moral abuse of minors by priests, I can – as you know – only take note with deep concern. I have never tried to hide these things. That the power of evil penetrates to such an extent in the inner world of faith is for us a source of suffering which, on the one hand, we have to endure, while, on the other, we must at the same time do everything possible to ensure that such cases are not repeated. Nor is it reassuring to know that, according to the research of sociologists, the percentage of priests who are guilty of these crimes is not higher than that found in other similar professions. In any case, one must not present this deviance ostentatiously, as if it were a nastiness specific to Catholicism.

On the other hand, if we may not remain silent about evil in the Church, neither can we keep silent about the great shining path of goodness and purity which Christian faith has traced through the centuries. You must remember the great and pure figures that faith has produced: Benedict of Nursia and his sister Scholastica, Francis and Clare of Assisi, Teresa of Avila and John of the Cross, the great saints of charity like Vincent de Paul and Camillo de Lellis, Mother Teresa of Calcutta and the great and noble figures of nineteenth century Turin. It is also true today that faith leads many people to selfless love, in service to others, sincerity and justice.(…)

What you say about Jesus is not worthy of your scientific rank. You question whether, after all, we can know anything about Jesus, suggesting that we can know nothing about him as a historical figure, and so I can only invite you to become a bit more competent from a historical point of view. In this regard I recommend especially the four volumes that Martin Hengel (an exegete from the Protestant Theological Faculty of Tübingen) published together with Mary Schwemer: this work is an excellent example of historical accuracy and very broad historical information.

In the face of this, what you say about Jesus is reckless talk that should not be repeated. That there has been too much exegesis written that lacks seriousness is, unfortunately, an indisputable fact. The American Jesus Seminar you have cited on pages 105 ff only confirms again what Albert Schweitzer noted in his Geschichte Leben-Jesu-Forschung (The Quest of the Historical Jesus) — that is, that the so-called "historical Jesus" mostly reflects ideas of the authors. These flawed historical works, however, do not compromise the importance of serious historical research, which has led us to true knowledge about the figure of Jesus and confidence in proclaiming him.(…)

I also forcefully reject your statement (p. 126) that I presented the historical-critical method of exegesis as a tool of the Antichrist. In treating the story of Jesus' temptations, I have merely presented Soloviev's thesis, according to which historical-critical exegesis can also be used by the antichrist – which is an indisputable fact. At the same time, however, always — and in particular in the preface to the first volume of my book on Jesus of Nazareth — I explained clearly that historical-critical exegesis is necessary for a faith that does not propose myths with historical images, but calls for a genuine historicity and therefore must present the historical reality of its claims in a scientific manner. You are not even correct when you tell me that I would be interested only in meta-history; quite the contrary, all my efforts are aimed to show that the Jesus described in the Gospels is also the real historical Jesus, that it is a story that really happened. (…)

By the 19th chapter of your book we return to the positive aspects of your dialogue with my thinking. (…) Even if your interpretation of John 1:1 is very far from what the evangelist meant, there is a convergence that is important. If, however, you want to replace God with "Nature", it begs the question: Who or what is this nature? Nowhere do you define it, and thus it appears as an irrational deity which explains nothing.

But I want especially to note that in your religion of mathematics three themes fundamental to human existence are not considered: freedom, love and evil. I'm astonished that you just give a nod to freedom, which has been and is the core value of modern times. Love, in this book, does not appear, and it says nothing about evil. Whatever neurobiology says or does not say about freedom, in the real drama of our history it is a present reality and must be taken into account. But your religion of mathematics doesn’t recognise any knowledge of evil. A religion that ignores these fundamental questions is empty.

Dear professor, my criticism of your book is in part harsh. Frankness, however, is part of dialogue: Only in this way can understanding grow. You were quite frank, and so you will accept that I should be also. In any case, I very much appreciate that you, through your confrontation with my Introduction to Christianity, have sought to open a dialogue with the faith of the Catholic Church and that, notwithstanding all the contrasts in the central area, points of convergence are nevertheless not lacking.”

(Translation by MercatorNet assisted by Google. For the Italian original see La Repubblica.)

Originally published by MercatorNet on 27 September 2013.