Materialism Robs Us of Our Humanity, Warns Pope Francis 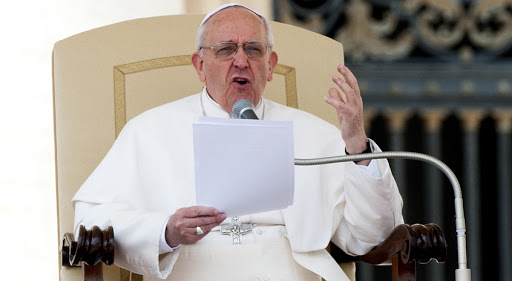 The Holy Father celebrated mass on Sunday from St Peter’s Square along with thousands of faithful.

Pope Francis celebrated Mass in cloudy St. Peter’s Square this morning, cautioning the faithful against the danger of losing their personal identity to materialism.

“Whenever material things, money, worldliness, become the center of our lives, they take hold of us, they possess us; we lose our very identity as human beings,” he said on September 29.

Sunday’s Mass was held at the close of an international weekend conference in Rome for catechists during the year of faith.

The Pope explained that Christians must be on guard against “the danger of complacency, comfort, worldliness in our lifestyles and in our hearts, of making our well-being the most important thing in our lives.”

When materialism takes over, we “end up becoming self-absorbed and finding security in material things which ultimately rob us of our face, our human face.”

Too much concern for material things can lead us to “lose the memory of God.”  With this forgetfulness, Christians “become empty; like the rich man in the Gospel, we no longer have a face!”

Mary serves as an example for all because she maintains the remembrance of God.

Instead, she goes to help others.

When Mary visits her cousin Elizabeth after the Annunciation, Pope Francis said, she recalls “God’s work, God’s fidelity in her own life, in the history of her people.”

Christian catechists should seek to be like Mary, putting the remembrance of God “at the service of proclamation, not to be important, not to talk about himself or herself, but to talk about God, about his love and his fidelity.”

“The catechist, then, is a Christian who is mindful of God, who is guided by the memory of God in his or her entire life and who is able to awaken that memory in the hearts of others,” explained the Pontiff.

Yet, “this is not easy!” he acknowledged. “It engages our entire existence!”

The work of the catechist is not merely his or her own work, Pope Francis reminded the congregation.

Rather, the gift of faith in our lives “contains our own memory of God’s history with us, the memory of our encountering God who always takes the first step, who creates, saves, and transforms us.”

An estimated 600 priests were vested for the mass, as well as cardinals and bishops from around the world, including Archbishop Rino Fisichella, President of the Pontifical Council for the New Evangelization, and Cardinal Sean O’Malley of Boston, who is part of the group of eight cardinals appointed to advise the Pope on possible reforms to the Roman Curia.

He particularly thanked His Beatitude John X, the Greek Orthodox Patriarch of Antioch and All the East, for his presence at the liturgy. He called the Patriarch “my brother.”

The Pope then greeted the cheering pilgrims from his Popemobile, stopping to bless babies and the disabled.

The crowds were so large that they spilled out of St. Peter’s Square, filling Via della Conciliazione, the street leading to the square.  Hand-painted flags waved with messages like “thank you for having called us” and “we go to serve without fear.”  Many people wore “Year of Faith” scarves around their necks.

Originally published at Catholic News Agency on 29 September 2013. Used with permission. All other rights reserved.