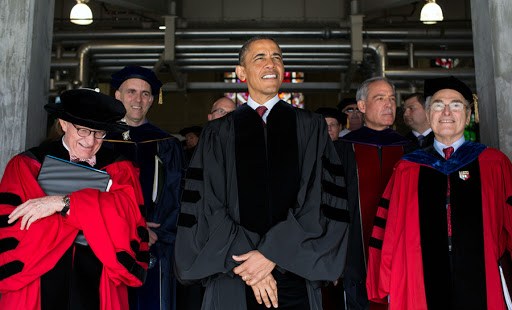 Cardinal Burke laments the “grave scandal” on many Catholic college campuses, brought about by tolerating dialogue in support of abortion and same-sex marriage.

Cardinal Raymond Leo Burke, Vatican prefect of the Supreme Tribunal of the Apostolic Signatura, is warning that a “false sense of dialogue” has led to “grave scandal” on many Catholic college campuses.

Reports about Cardinal Burke’s recent interview with The Wanderer have focused largely on his statements about the Eucharist and its reception by pro-abortion politicians, but he also made important comments about Catholic college honors to politicians and the importance of teaching the truth about same-sex marriage.

Cardinal Burke told The Wanderer that it’s impossible to reconcile the Catholic identity of a Catholic college with decisions to honor political figures who have taken positions in support of abortion rights and same-sex marriage.

“You cannot reconcile it — it is a contradiction, it is wrong, it is a scandal, and it must stop! We live in a culture with a false sense of dialogue — which has also crept into the Church —where we pretend to dialogue about open and egregious violations of the moral law. Can we believe it is permissible to recognize publicly people who support open and egregious violations, and then act surprised if someone is scandalized by it? For Catholic institutions or individuals to give recognition to such persons, to honor them in any way, is a source of grave scandal for which they are responsible. In a certain way, they contribute to the sinfulness of the individuals involved. There is no way to reconcile it; it simply is wrong.”

Cardinal Burke also said the prevalence of the culture of death and recent same-sex marriage victories can be, at least in part, laid blamed on poor catechesis.

“We as Catholics have not properly combatted it, because we have not been taught our Catholic Faith, especially in the depth needed to address these grave evils of our time. This is a failure of catechesis both of children and young people that has been going on for fifty years. It is being addressed, but it needs much more radical attention. I can say this because I was the bishop of two different dioceses.
“After fifty years of this, we have many adult voters who support politicians with immoral positions because they do not know their Catholic Faith and its teaching with regard to same- sex attraction and the inherent disorder of sexual relations between two persons of the same sex. Therefore, they are not able to defend the Catholic Faith in this matter.”

Cardinal Burke said that an inappropriate understanding of the virtue of the term “tolerance” has also contributed to the culture of death. “Tolerance is a virtue, but it is certainly not the principal virtue; the principal virtue is charity,” he said. “The virtue of charity leads us to be kind and understanding to the individual, but also to be firm and steadfast in opposing the evil itself.”

He said too many Catholics have opted for silence in the face of evil. “But we cannot be silent any longer,” he said, “or we will find ourselves in a situation that will be very difficult to reverse.”