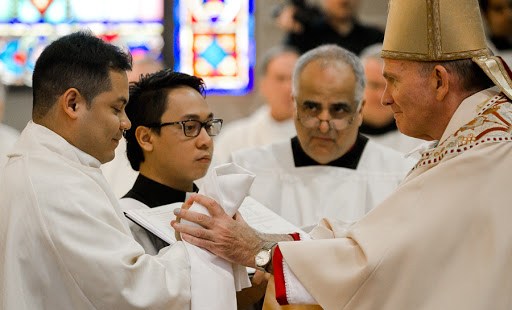 Following decades of downward trends, the number of men currently enrolled in graduate seminaries is the highest it has been in two decades.

Following decades of downward trends, the number of men currently enrolled in graduate seminaries is the highest it has been in two decades, according to Georgetown University’s Center for Applied Research in the Apostolate (CARA).

St. Vincent de Paul Regional Seminary in Florida has seen enrollment rise from 61 students in 2010 to 85 this year, according to the Sun-Sentinel newspaper. Fr. David Toups, the seminary’s rector, told the newspaper that the seminary may be forced to expand if this trend continues. "We can always use more priests,” he reportedly said. “There will never be a shortage of work."

Kenrick-Glennon Seminary in St. Louis saw 125 seminarians in the pre-theology and theology programs. That’s reportedly the highest enrollment the seminary has seen in the past 15 years. Jesuit Father John Horn, the president-rector, told The St. Louis Review, “People are happy that the numbers have increased. How can you not be happy?"

Meanwhile, the Church has continued to grow in the U.S. Since 1965, the number of Catholics, according to the Official Catholic Directory, has grown from 45.6 million to 66.8 million this year.