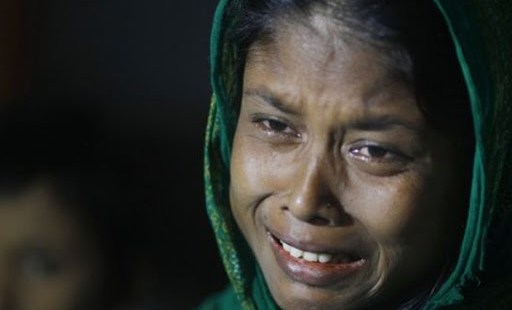 An elderly woman was killed and three injured on Tuesday following another bout of inter-religious violence in western Myanmar.

The attacks, which coincided with President Thein Sein’s first visit to restive Rakhine state since he took office in early 2011, left at least 70 Muslim homes torched.

Triggered by an argument between a Buddhist taxi driver and Kyaw Zan Hla, a leader of the Kaman Muslim Party, in the town of Thandwe on Sunday, Buddhist mobs went on the rampage in several nearby villages. Kyaw Zan Hla has since been detained by police.

There are conflicting reports of the death toll, with a social worker from Thandwe claiming five Muslims were killed. One mosque has also reportedly been destroyed.

“Local police say the situation is under control but in reality, many Muslim homes were torched and many people fled to safer places,” he said. “The rioters have escaped. Where is the rule of law in the country?”

Win Myaing, a spokesperson for the Rakhine state government, confirmed the woman's death yesterday. News reports said the woman, believed to have been 94, was killed with a sword.

“No more sectarian violence is spreading to other villages in Thandwe as of Wednesday morning,” Win Myaing told ucanews.com. Unconfirmed reports have circulated, however, claiming that additional attacks took place in a village south of Thandwe.

Thein Sein was planning to visit Thandwe on Wednesday and was to meet with government officials and residents there, according to an unnamed senior officer from the president’s office who was quoted by the Associated Press on tuesday.

A curfew enacted last year when violence swept the state remains in place, though local Muslims claim it does not apply to the Buddhist majority.

In contrast to last year’s violence, which mainly targeted the Muslim Rohingya minority, and whom most Rakhine believe to be illegal immigrants, the latest attacks have targeted Kaman Muslims, who are distinct from the Rohingya and who have Myanmar citizenship.

"Those who are spreading messages of intolerance and hatred must not go unchallenged," Jim Della-Giacoma, Asia program director of the International Crisis Group, said in a statement on Tuesday.

“Otherwise, this issue could come to define the new Myanmar, tarnishing its international image and threatening the success of its transition away from decades of authoritarianism," he said.

Originally published at UCAnews on 2 October 2013. Used with permission. All other rights reserved.