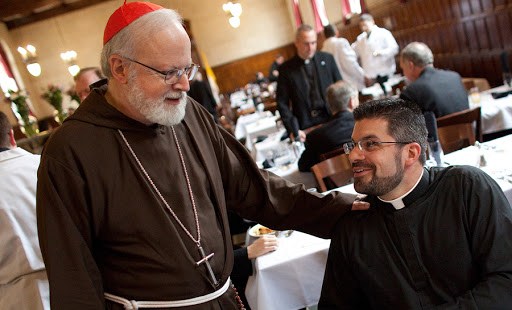 Cardinal Sean O’Malley offers encouragement to those defending life and emphasizes the need to continue pro-life efforts in a message for Respect Life Month 2013.

Citing the words of Pope Francis, the leader of the U.S. bishops’ pro-life committee called the faithful to open their hearts to Christ, sharing the Gospel message of mercy and the sanctity of human life.

“Only a tender, compassionate love that seeks to serve those most in need, whatever the personal cost, is strong enough to overcome a culture of death and to build a civilization of love,” said Cardinal Sean P. O'Malley of Boston.

“Let us open our hearts and reflect on how God might be calling each of us to witness the sacredness of human life and assist in pro-life efforts.”

The cardinal offered encouragement to those defending life in a message for Respect Life Month 2013.

Respect Life Month, which will begin this year on Oct. 6, is a month set aside by the U.S. bishops for prayer and education on issues concerning the sanctity of life in all stages. This year's theme is “Share the truth about human life,” which “echoes Pope Francis' call for all people to 'Open your hearts to life!'” Cardinal O'Malley said.

In his message, the cardinal emphasized that the weakest members of society “are often unwanted and endangered by acts of violence or neglect.”

He pointed to the grave threats facing the sanctity of life, including abortion and euthanasia.

It has now been 40 years since the U.S. Supreme Court rulings Roe v. Wade and Doe v. Bolton, he observed, explaining that these rulings “made it legal to end the life of an unborn child in the United States for any reason and at almost any stage of development.”

During this time, Cardinal O’Malley said, more than 55 million “unborn children's lives have been taken,” and millions in society have been wounded.

He added that physician-assisted suicide is posing a new threat to the sanctity of life and paving “the way for euthanasia by undermining true respect and care for people with serious illness.”

But although we are capable of grave sins against human life, “we are not beyond Christ's mercy,” the cardinal continued, encouraging people to search for and “acknowledge our deepest longing for Christ's love.”

He pointed to Pope Francis, who “reminds us that we always have hope in Christ.”

The Pope teaches us that coming to Christ “has the power to transform us,” which in turn encourages “loving, merciful action toward others,” he said.

This call to share Christ’s love and mercy is urgent, Cardinal O'Malley stressed, explaining that followers of Jesus “must give witness to the Gospel of Life and evangelize through our lives.”

“We must personally engage others and share the truth about human life,” he stated. “We must continue to show love and mercy, especially with those who have been involved in abortion.”

“All members of the Church can bring healing to the world by upholding the beauty of human life and God's unfailing mercy."