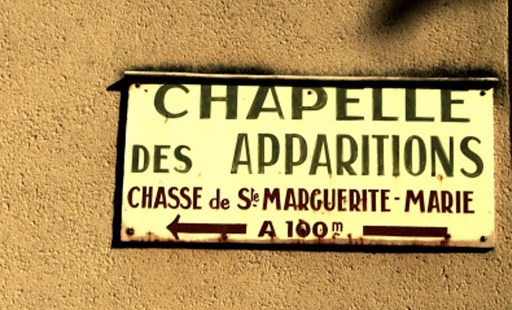 You’ve heard of Fatima, you’ve heard of Lourdes, but here’s a place you may not know about, where Christ did something very special…

In the sleepy town of Paray Le Monial, lost in the French countryside, something extraordinary happened on a cold winter's night, which the Church will never forget.

She has come to the place she knows and loves best of all, Christ exposed in the Blessed Sacrament. She is praying, as is her usual habit, when all of a sudden, He appears to this young saint and reveals to her His most Sacred Heart.

St Margaret recalls in her diary: “I felt myself wholly penetrated with that Divine Presence, but to such a degree that I lost all thought of myself and of the place where I was. He made me repose for a long time upon His Sacred Breast, where He disclosed to me the marvels of His love and the inexplicable secrets of His Sacred Heart.”

She tells of how Jesus spoke to her:

“My Divine Heart is so inflamed with love for men, and for thee in particular that, being unable any longer to contain within Itself the flames of Its burning charity, It needs to spread them abroad by thy means, and manifest itself to them (mankind) in order to enrich them with the precious treasures which I discover to thee, and with contain graces of sanctification and salvation necessary to withdraw them from the abyss of perdition. I have chosen thee as an abyss of unworthiness and ignorance for the accomplishment of this great design, in order that every thing may be done by Me.”

She then explained how afterwards, Jesus asked her for her heart “which I begged Him to take” she writes. “He did so and placed it in His Adorable Heart where He showed it to me as a little atom which was being consumed in this great furnace, and withdrawing it thence as a burning flame in the form of a heart, He restored it to the place whence He had taken it saying to me: ‘See, my well beloved, I give thee a precious token of my love, having enclosed within thy side a little spark of its glowing flames, that it may serve thee for a heart and consume thee to the last moment of thy life; its ardor will never be exhausted, and thou will be able to find some slight relief only by bleeding. As a proof that the great favor I have done thee is not imagination, although I have closed the wound in thy side, the pain will always remain. If hitherto, thou hast taken only the name of My slave, I now give thee that of the beloved disciple of My Sacred Heart.’”

After this experience, the 26 year old sister continued for days to be consumed by the fire of His divine love. So intense was her state that to say even a single word, she had to do herself violence, and she could not sleep from the pain of the wound, which burned and consumed her alive from its heat.

St Margaret Mary Alacoque continued to feel such pain every first Friday of the month up until she died. She also had three more revelations from Christ, where He came and spoke to her, revealing His Sacred Heart.

Margaret was born 25 July, 1647 in Janots, a little town in Burgundy. She was the fifth of seven children of a wealthy notary. When she was only 4 years old, Margaret made a promise to God, with these words: “Oh my Lord, I consecrate to you my purity and I make a vow of perpetual chastity,”  although she didn't understand what the words “vow” or “chastity” meant at the time.

Her father died of pneumonia when she was eight. Two years later she fell ill herself with a serious rheumatic condition, which kept her bedridden until she was fifteen. During this time she turned to the Blessed Virgin Mary.

She made a vow to Mary that if she healed her, she would become one of her daughters. Margaret Mary recounted: “As soon as I made this vow I was cured, with a new protection from the most Blessed Virgin, who now became so completely the mistress of my heart that She looked upon me as belonging to her and governed me as being dedicated to her, reproving me for my faults, and teaching me to do the will of my God.”

However her family had other plans for her, ones of marriage. Margaret, loving her mother so tenderly, went along with her wishes for a while and went into society. However her heart was always with Christ, and finally her burning desire to be His spouse could no longer be denied and in 1671 she entered into the Visitation convent, dedicated to Mary, where she knew that the Lord was calling her.

In the convent she was known for her charitable, humble and obedient nature. Although after the apparitions she experienced of Christ, she received a lot of skepticism from her fellow sisters and from the Church. She bore much humiliation. Her mother superior, worrying for the young nun’s health, appealed to theologians for help. She was set before them, and from them, too, received skepticism.

But then in 1675, a Jesuit priest (and now saint) Claude de la Colombière came to the convent. He was renowned for being a holy and wise man, and he discerned the sanctity of the young sister and the authenticity of her revelations. He became her spiritual director.

She then had her fourth and last revelation where Christ said to her “ I ask of thee that the Friday after the Octave of Corpus Christi be set apart for a special Feast to honor my Heart, by communicating on that day.”

She died at 43 years of age, on 17 October, having professed that this would be the day she would die and entrusting her soul completely to the Lord.

The doctor who was by her side at her deathbed said “since she lived only for love, love was the cause of her death.”

It was only 3 years after her death that Pope Innocent XII enriched this feast of the Sacred Heart with indulgences, in an address to the monastery at Dijon. Then in 1765 Pope Clement XIII introduced the feast at Rome. In 1856, Pope Pius IX extended the feast to the whole of the church.

In 1920, Margaret Mary Alacoque was canonized by Pope Benedict XV. Her body rests under the altar at the apparitions chapel in Paray le Monial. Today it has become a place of pilgrimage to the Sacred Heart for people from all over the world, and is the heart of the Emmanuel Community, a recognized community of the Catholic Church which rests on the fundamental pillars of adoration, compassion and evangelisation.

Milligan describes it as a place that reveals “the major message of God’s mercy, of His gentle and humble heart”. He says that it is a “call to conversion; to live by imitating Christ, by imitating His heart.”

Milligan explains the particular importance of the place for the Emmanuel Community.

The Community first came in 1975 – thanks to the idea of its founder, Pierre Goursat – on "the 300th anniversary of the great apparition of Jesus to St Margaret Mary where He said: ‘This is the heart which has loved men so much and received such little love in return.’”

Milligan explains that the members of the community “discovered that their own experience of the outpouring of the Holy Spirit, of the mercy of God, of the closeness of God in His Word and in His Sacraments, was in fact something that was already present in this place, in Paray le Monial and in particular in the apparitions chapel.”

He noted that many of these apparitions to St Margaret actually took place in front of the Blessed Sacrament exposed, “and it was in this place that Pierre Goursat's personal habit of eucharistic adoration, was able to be transmitted to the members of the Emmanuel Community” he explains, “as being something which was not just a personal habit, but which fitted in with the experience of the outpouring of the Holy Spirit and also the discovery of the Sacred Heart as being an expression of this outpouring of the Holy Spirit.”

He continues: “so there is a direct link between the apparitions of the Sacred Heart of Jesus to St Margaret Mary, the adoration of the Blessed Sacrament and the outpouring of the Holy Spirit, as an expression within the Emmanuel Community, an expression of this mercy of God in His heart.”

Milligan also shares with Aleteia his personal experience of being in the apparitions chapel.

His first visit was in 1989 with a group of Scottish and Irish students, to a youth forum being held there. During the session, the apparitions chapel was open all night for adoration of the Blessed Sacrament.

“I had decided at the beginning of the evening that I would go to the chapel to pray all night” he recalls. “I was sitting almost alone, at about midnight, and I saw with the eyes of my heart, many ways in which God had been faithful to me through the years.”

“I was struck by this experience of the faithfulness of God” he adds.

“I saw, again with the eyes of my heart, pebbles in a mountain stream, pebbles that were being rounded by the power of the water. It seemed to me to be a demonstration of His faithfulness over time, because He showed me points in my life where I could have fallen, and in fact He had protected me, He had been faithful.”

He continues: “and at the same time it was a promise –  like one of these pebbles which was little by little being rounded off and moulded by the stream  – as if God was saying to me: ‘My work is not finished on you yet, but I will continue to work on you.'”

“And with that I opened my bible, and I found a passage from the prophet Ezekiel 36: 26, ‘I will give you a new heart, I will pour out a new Spirit on you, I will take away your heart of stone and give you a heart of flesh instead.’”

“And it was only in the days that followed that I understood that this particular text from the prophet Ezekiel is one that the church fathers have always associated with this idea of the heart of Jesus.”

To discover more about the Emmanuel Community click here