The Day I Met John Paul II in a Pizza Joint 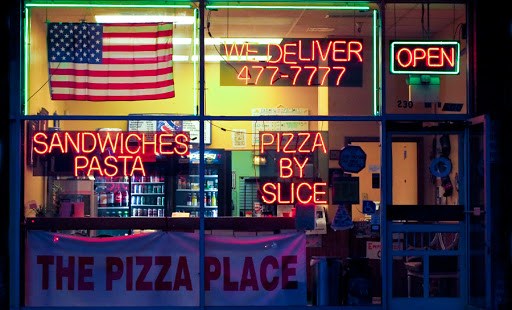 I joked the Catholic Church would probably collapse in my lifetime – but I just couldn’t shake the thought that she just might be exactly who she says she is.

For nearly a decade I wandered in a spiritual wasteland trying to find God, but looking for him everywhere but in Christianity.  I looked for him in New Age occult practices, in Buddhism, and the world’s other non-Christian organized religions.  One day, while living deep in the Bible Belt, I came across a Chick tract, which insisted that Catholics were Satanists who worshipped something he called a “Death Cookie.”

The tract was so jarringly abrasive, I felt indignant on behalf of Catholics.  In an attempt to disprove the wild accusations of Jack Chick, I found myself researching Catholicism for the first time ever.  That’s when I learned about the Eucharist – about the teaching that God Himself comes to the faithful as a piece of bread, and my whole worldview changed.

This teaching was so radical, so outrageously absurd, that it couldn’t be true.  But the thought kept haunting me – what if it was?  What if the God I’d been searching for was right there, waiting for me, patiently and humbly under the appearance of bread?

I responded by trying to run away, by shoving my fingers in my ears and closing my eyes and saying, “I can’t see you.  I can’t hear you,” to God.  What happened next was his response.

Suddenly, the whole world seemed to be speaking about nothing but Catholic issues. Somewhere in Florida, a woman named Terri Schiavo was dying. There was chatter on the radio about it every day. My safe secular world talked about dying with dignity and last wishes and the authority of next of kin, which was all well and good as far as I was concerned. But then there were all these Catholic bishops who just wouldn’t shut up about the sanctity of human life, how that life was measured from conception to natural death, and how Terri Schiavo’s husband was advocating murder.

I wanted Terri Schiavo to go away, because she had brought the bishops with her. And every time I heard a bishop speaking, I started thinking about Catholic notions of apostolic succession and their claims to an unbroken line all the way back to Peter and the Apostles, and all their continuity and unity and fullness of the truth and the Eucharist. It always came back to the Eucharist.

Then, tragically, Terri Schiavo did go away, murdered by the people she should have been able to count on, and I selfishly thought we’d be able to go back to bishop-free business as usual. But I was wrong – so wrong; only a few days later, the world turned its eyes to the final days of Pope John Paul II. I thought the Catholic problem was bad with the Schiavo case, but it reached intolerable levels during the Pope’s deathwatch.

Every day, the Catholic church across the street from my subdivision had its parking lot full to overflowing. As I irritably maneuvered my way past the cars parked on the side of the road, I threw baleful looks at the turquoise-roofed building: Queen of Peace Catholic Church. With its gaudy tin roof and its ridiculously Catholic name and all those people inside, every day united in grief and prayer over the last days of some old man in Rome, that building became the focal point for my exasperation.

Saturday, April 2, 2005, dawned lovely and clear. My husband, my two-year-old daughter, and I went to run errands, getting odds and ends ready for the new baby, who was set to arrive sometime in the next two months. We stopped for lunch at a local pizza chain that featured TVs on the ceilings, an all-you-can-eat pizza buffet, and an atmosphere so loud that our high-spirited two year old wouldn’t have to be shushed to spare the digestion of other patrons.

We settled in, and as my husband took our daughter up to the buffet, my eyes drifted to one of the flickering TV screens, and I saw the news. The sound was muted, so the only way I could make sense of the images was by reading the news ticker crawling across the bottom of the screen: Pope John Paul II, after a very public struggle with Parkinson’s, had just died. I read the words, then suddenly started crying. Right there in the middle of a stupid pizza joint, crying. For a man I didn’t know, who was the leader of a Church I didn’t want to think about – crying.

I rushed to the bathroom before my family could come back to the table and ask what I was doing. In the stall in the miraculously empty bathroom, I heaved these startling, deep sobs. I felt as if my heart were breaking over the loss. I couldn’t understand what was going on; I thought it was either pregnancy hormones or some sort of nervous breakdown. While I certainly didn’t consider myself to be part of the Chick Tract Anti-Catholicism Club, I had no love for the Church. One of my favorite phrases, when the subject turned to anything Catholic was “The Church is going to crumble under its own bloated weight. If we’re lucky, it’ll happen in our lifetime.”

This was the woman who found herself sobbing in a bathroom stall over the death of a pope. But, rather than dwell on my possible mental collapse, I pulled myself together, washed my face, and went back to my table, making sure to take a seat with my back to the TV screen.

Just over a year after his death, my husband and I entered the Church.  Two weeks later, we had our children baptized.  And while the radical conversion of a New Age feminist to a Catholic mother of six isn’t one of the official miracles recognized in his canonization, I have no doubt whatsoever that it was the prayers and intercession of Blessed (soon to be Saint!) John Paul II that helped me come home to Holy Mother Church.

The preceding is an excerpt from my upcoming book, Pope Awesome and Other Stories: How I Found God, Had Kids, and Lived to Tell the Tale.  The story follows my years of spiritual wandering, and tells the tale of God doing great things with flawed vessels.