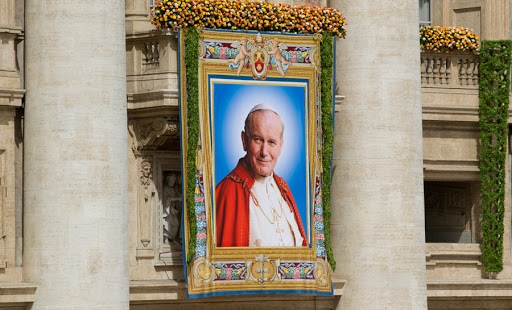 The Washington, D.C., shrine dedicated to John Paul II is preparing to celebrate his sainthood and continuing “legacy of love.”

Upon hearing the official date for John Paul II’s canonization, the Washington, D.C., shrine dedicated to the former Pope is preparing to celebrate his sainthood and continuing “legacy of love.”

“We want millions of people to come here to learn about their faith, and particularly John Paul II,” Patrick Kelly, executive director of the Blessed John Paul II Shrine, explained to CNA Oct. 2.

“He is a saint and we can emulate that – that gift of self – in all walks of life.”

On Sept. 30, the Vatican announced that Pope John XIII and Pope John Paul II will be canonized together on April 27, 2014, the second Sunday of Easter, which is also Divine Mercy Sunday.

Kelly explained that the date of the canonization on Divine Mercy Sunday “was very appropriate.”

John Paul II “was known as the Pope of Divine Mercy” because of his writings on mercy and his instrumental role “in the (canonization) cause of St. Faustina,” Kelly said, as well as the Pope's passing away on the Vigil of Divine Mercy Sunday in 2005.

John Paul II had instituted that feast of Divine Mercy in 2000.

Kelly also noted the significance of the Pope's canonization alongside John XIII, who opened the Second Vatican Council. There was a great continuity between the two Popes, who “were both committed to evangelization and to bringing Christ to the modern world in a profound way,” he said.

In celebration of the canonization, the D.C. shrine will hold a youth event and vigil, featuring a movie about the life of John Paul II, a Mass said at midnight, Eucharistic adoration, and veneration of a relic containing a fragment of the Pope's blood-stained cassock from the 1981 attempt on his life.

The shrine will also host a simulcast of the canonization in the early hours of the morning, and a large Mass on that Sunday morning for local pilgrims from surrounding dioceses. In addition, it will unveil a new “Saint John Paul II Shrine” sign outside of the building and allow pilgrims to visit an interim exhibit offering a “spiritual journey through JP II’s life.”

Following the Pope's canonization, Kelly said, the shrine will open a new 16,000 square foot “world-class” permanent exhibit dedicated to the life and teachings of the saint, which “will really make John Paul II come alive.”

Kelly added that his hope for the shrine is that it will help visitors to “see the Christian witness of John Paul II and be inspired by it.”

He described the upcoming canonization as “huge,” especially for young people, explaining that the late Pope was “very committed to young people and young adults,” starting the practice of World Youth Day and “inspiring” young people around the globe.

“Young people saw in him an authenticity and a love,” Kelly explained. “Young people have a sense for 'the real thing,' and I think they saw that in him and responded to it.”

“He loved young people too,” Kelly continued, “because of their exuberance, and I think it was an electricity he liked to be around.”

The love of youth was one of “many different legacies that John Paul leaves,” he added, along with messages of “continuing conversion,” “human dignity,” and a challenge for Christians to “be not afraid.”

However, “his greatest legacy is a legacy of love,” Kelly said.

“It was love that motivated him to do the extraordinary things he did in his life: love for God, first and foremost, and then love for man.”

“He is such an extraordinary example of a man who conforms his life to Christ and then takes action on that.”