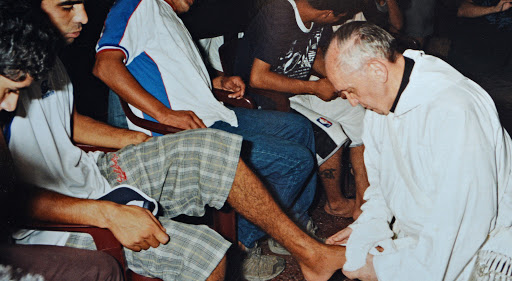 During Argentina’s Dirty War, Jorge Bergoglio saved the lives of scores of dissidents, according to a new book.

Jorge Mario Bergoglio, now Pope Francis, had the abilities, prudence and shrewdness of a secret agent who saved the lives of over a hundred people – possibly more – during Argentina’s Dirty War in the 1970s.

The 192-page work, just published in Italian by EMI books, reveals how then-Father Jorge Bergoglio masterminded a secret strategy to save those targeted in a clandestine war of suspected dissidents waged by Argentina’s military Junta. “The picture that emerges of Bergoglio is that of a capable man, who acted with the prudence and shrewdness of a 007,” Scavo told Vatican Radio.

He said it’s not possible to give precise estimates of how many lives Bergoglio saved, mainly because he never wanted to talk about his efforts. He also did not collaborate on the book. But the author, a journalist with the Italian bishops’ newspaper Avvenire, said he had collected dozens of accounts from witnesses of different periods, some who knew him and others who didn’t.

“Let’s say, as a matter of prudence, we can affirm that more than 100 people were certainly saved by Father Jorge Mario Bergoglio at that time,” Scavo said, adding many others were “indirectly saved” by the Jesuit priest. At a book launch in Rome on October 7, Scavo put the figure at more than the 1,200 lives saved in total, exceeding the number of those rescued by the German industrialist Oskar Schindler during World War II.

One method Bergoglio used was to hide students, both men or women, in the Maximo College of San Miguel in Buenos Aires. Even his fellow Jesuits were unaware of his actions, believing the new arrivals were youngsters in the process of spiritual discernment or seminarians on retreat.

While there, Bergoglio drew up a secret plan to allow them to escape. “Under cover, they reached Brazil, for example, where a network was devised, again by the Jesuits, which allowed them to make it to Europe,” Scavo said. “He used his sphere of influence, friendships, and knowledge in order to obtain small, individual favours.”

Among those whose support he garnered were people who could obtain documents to travel abroad, or who could share news on arrests and kidnappings. Bergoglio saved not only young people but also unionists, priests, intellectuals, and others.

But his record during the 1976 – 1983 Argentine dictatorship was not without controversy. As head of the Jesuits in Argentina from 1973 to 1979, the future pope was accused of complicity with the regime.

Critics have said he was too silent about the human rights abuses taking place at that time, though supporters stress that Bergoglio’s caution was an act of prudence, allowing him to save as many lives as he could. Many priests, nuns and bishops died at the hands of the Junta, and, like Pius XII during World War II, Bergoglio felt he could save more lives by helping in a clandestine fashion. Furthermore, his position was relatively junior and unlikely to have carried much weight even if he had spoken out more.

But he has also been accused of denouncing two Jesuits to the regime. Franz Jalics, now living in Germany, and Orlando Yorio, who has since died, were once convinced that Francis had turned them in, leading to five months’ imprisonment and torture. The regime viewed their work for the poor with suspicion, and suspected they supported the guerrillas.

The two were reconciled with Bergoglio in 2000. Jalics has since carried out his own investigation and found Bergoglio not to have been involved in the denunciation. He also made a declaration, soon after Francis’ inauguration as pope, in which he said: “The fact is, Orlando Yorio and I were not denounced by Father Bergoglio.” The Jesuit was received in private audience by the Pope at the Vatican on October 5.

Scavo’s book, to be published in English soon, also reveals that once kidnapped by the regime, Bergoglio sought to free the two men at his own personal risk. “We reconstruct a very tough face-to-face meeting that took place between Father Bergoglio and Admiral Massera , the head of the Navy — a terrible man – during which Bergoglio tries to obtain the return of these two priests,” Scavo said.

The author has said that all the stories of rescue have been touching, and he has been struck by the fact that Bergoglio saved believers and non-believers, the young and the old. He offers a detailed picture of the consolation Bergoglio offered to those he saved. On one occasion, he gave Uruguayan militant Gonzalo Mosca – now mayor of a Uruguayan town – some works by Argentine writer Jorge Luis Borges and a radio so he could stay up to date as he escaped to Brazil.

The book also mentions Ana and Sergio Gobelin, two Christians who worked in the Buenos Aires’ Bajo Flores slum. Bergoglio visited them in the slum and celebrated their wedding, but Sergio was arrested and incarcerated. Bergoglio managed to have him released with the help of the  Italian consul and the couple fled to Friuli, in northeastern Italy. He convinced them to leave Argentina, saying that they would be no use to the poor slum dwellers dead. Jesuit Father Juan Manuel Scannone, a proponent of the Liberation Theology movement, also recounted how Fr. Bergoglio “covered my back, he saved me” and did so “on many occasions”.

Pope Francis is a firm believer that actions speak louder than words. Scavo’s book is consistent with this approach. His heroic actions in the face of a wicked and murderous regime speak volumes.

Originally published at MercatorNet on 8 October 2013. Used with permission. All other rights reserved.