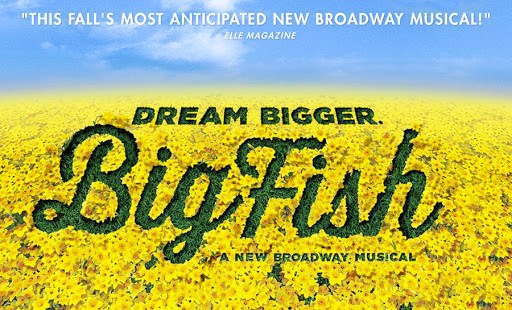 The much anticipated musical brings you a dazzling cast, tall tales and the complexities of a father – son relationship

"Be the hero of your story," pleads Edward Bloom, in the opening song of Big Fish, one of the most anticipated new musicals of the 2013-2014 Broadway season. Based on the 1998 novel by Daniel Wallace, and later adapted into the 2003 Tim Burton film by the same name, Big Fish is the fantastical account of a young man in pursuit of finding out who his father really was, rather than just a man consumed by the stories he told.

And the stories told by the traveling salesman Edward Bloom, played by two-time Tony Award winner, Norbert Leo Butz, are grand and fantastical. There's the witch that he encounters in the swamps of Alabama as a young man who reveals to him how he's going to die. Then there's the giant whom Edward befriends and as a result becomes the hero of his hometown. And, there are mermaids, circus masters, and dragons that fill the spaces in between.

While Bloom's wife, Sandra (Kate Baldwin), indulges Edward's penchant for story telling, his son, Will (Bobby Steggert), finds them to be superficial and evasive. During his childhood and adolescent years, Will allowed his father to live in his world of dreams and tall tales, but after Edward's diagnosis with terminal cancer, Will fears that his father might go to his grave with a legacy upheld only by fiction.

Will, a successful New York journalist, returns to Alabama to investigate his father's past. Like his father, Will has also made a career telling stories, though his have been from the front lines of war zones with hard facts and real consequences. As Will begins to piece together his father's history, he soon discovers that his stories, while fictional, provide clues to discovering a much more complex character than he had ever considered. And a man whose loyalty to his family was as immense as the tales he spent his life telling.

Butz delivers a commanding performance as Edward Bloom that may very well garner him a third Tony Award. Full of emotional depth and exhausting physicality, his stories are inviting and told with such conviction that one can only hope that they might just prove to be real. Bobby Steggert offers a multi-dimensioned performance of a young man desperate to know his father but afraid of the past that might be underneath his tales. Kate Baldwin rounds out the leads with a charming portrayal of a mother torn between spousal loyalty and sympathy to her son's frustrations. Baldwin has one of the richest voices on Broadway and it's unfortunate that it isn't better utilized in this production.

Andrew Lippa's music and lyrics are serviceable and sufficiently aid the story along, but never quite deliver the creativity required to elevate Big Fish from a good musical to a great one. It's disappointing that a musical about big imagination is strung together by music that lacks the very thing that it so desperately wants to deliver. Even so, the production manages to entertain under the deft direction and choreography of Susan Stroman (Contact, The Producers) who carefully manages to find a balance between the splashy, larger than life storytelling and the poignant and intimate relationships in between.

At the heart of Edward Bloom's tales are accounts of heroism and everyday people achieving extraordinary feats. Yet heroes are made believable, or at least sympathetic, by suspense, something that is unfortunately lacking in Big Fish. While the stories told by Bloom provide creative interludes, the narrative arc of this overall tale flat-lines pretty quickly.

Underneath the expensive scenic design and dazzling costumes, Big Fish is ultimately a reflection on dying, simply told with more color than most audiences are accustomed to. The stories told by Bloom are allegories of his own life's lessons and what he hopes to pass along to his son. For too long Will refused to consider these deeper meanings and for too long Edward refused to reveal the content behind them. With both father and son accepting and forgiving each other's faults, it's only in the show's final moments that they understand what each had spent a lifetime trying to communicate to the other. It's an all too familiar tale of bedside reconciliation that almost manages to feel formulaic, but so well acted that it's easy to forgive, even if it fails to deliver the final emotional punch that one would like to experience.

Despite its shortcomings, Big Fish is a show with a lot of heart and performed with such joy that one spends most of the show cheering it on in hopes of final success. In the closing moments before the end of act one, Edward and Sandra Bloom sing one of the show's more memorable duets. "Time stops still when dreams become real," they sing to one another. In a show composed mostly of fantasy and dreams, it's hard not to get caught up in its spell at times along the way. But as one exits the theatre, it becomes all too real how much of a dream this show is. The substance that sustains this production is the heart and soul its very talented troupe. One only wishes they were given material equal to their promise and caliber. In that case, I suppose it's nice to dream after all.