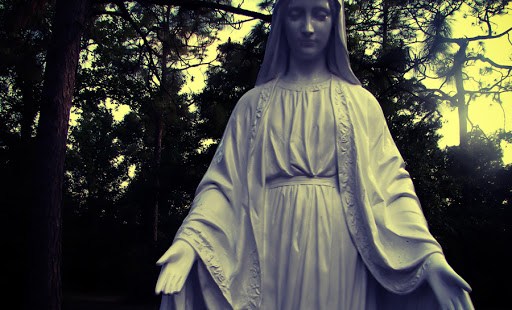 If you deny the perpetual virginity of Mary, you’ll have a hard time finding support in the tradition – even among Protestants.

The Catholic Church teaches that Mary, the mother of Jesus, was not only a virgin before Jesus was born but remained a virgin perpetually thereafter. If you don't buy it, you're not alone: many Protestants find this to be just another silly Catholic belief that can be quickly dismissed by anyone with a basic knowledge of Scripture since the Bible says Jesus had brothers and sisters.

"The word brothers, we have formerly mentioned, is employed, agreeably to the Hebrew idiom, to denote any relatives whatever; and, accordingly, Helvidius displayed excessive ignorance in concluding that Mary must have had many sons, because Christ’s brothers are sometimes mentioned."

There is another passage usually brought up as a evidence that Mary was not perpetually a virgin, Matthew 1.24-25: "When Joseph woke from sleep, he did as the angel of the Lord commanded him: he took his wife, but knew her not until she had given birth to a son. And he called his name Jesus."

"This passage afforded the pretext for great disturbances, which were introduced into the Church, at a former period, by Helvidius. The inference he drew from it was, that Mary remained a virgin no longer than till her first birth, and that afterwards she had other children by her husband. Jerome, on the other hand, earnestly and copiously defended Mary’s perpetual virginity. Let us rest satisfied with this, that no just and well-grounded inference can be drawn from these words of the Evangelist, as to what took place after the birth of Christ.

“He is called first-born; but it is for the sole purpose of informing us that he was born of a virgin. It is said that Joseph knew her not till she had brought forth her first-born son: but this is limited to that very time. What took place afterwards, the historian does not inform us. Such is well known to have been the practice of the inspired writers."

Who's this Helvidius that keeps getting mentioned? He was a 4th century theologian who taught that Mary was not a virgin after the birth Jesus and based this belief on the very same verses that we have brought up. Helvidius' view was immediately condemned in the Church as newly-invented blasphemy, with a famous defense of Mary's perpetual virginity given by St Jerome in his work The Perpetual Virginity of Blessed Mary: "Pray tell me, who, before you appeared, was acquainted with this blasphemy? Who thought the theory worth two-pence?" (18)

The explanations quoted above in defense of the perpetual virginity of Mary, while accurate, are fairly poignant. So who are they from? None other than the great Protestant Reformer John Calvin.

But notice that Calvin thought that "Helvidius displayed excessive ignorance in concluding that Mary must have had many sons, because Christ’s brothers are sometimes mentioned," (my emphasis) – the very same conclusion that many Protestants today make from those passages.

And regarding the other common Protestant argument from Matthew 1.24-25, Calvin thought "that no just and well-grounded inference can be drawn from these words of the Evangelist, as to what took place after the birth of Christ" and that "[w]hat took place afterwards, the historian does not inform us. Such is well known to have been the practice of the inspired writers."

Calvin was not alone among the Protestant Reformers in defending the perpetual virginity of our Blessed Mother.

"When Matthew says that Joseph did not know Mary carnally until she had brought forth her son, it does not follow that he knew her subsequently; on the contrary, it means that he never did know her . . . This babble . . . is without justification . . . he has neither noticed nor paid any attention to either Scripture or the common idiom." (That Jesus was Born a Jew)

"Christ, our Savior, was the real and natural fruit of Mary's virginal womb . . . This was without the cooperation of a man, and she remained a virgin after that. […] Christ . . . was the only Son of Mary, and the Virgin Mary bore no children besides Him . . . I am inclined to agree with those who declare that 'brothers' really mean 'cousins' here, for Holy Writ and the Jews always call cousins brothers." (Sermons on John)

"I firmly believe that Mary, according to the words of the gospel as a pure Virgin brought forth for us the Son of God and in childbirth and after childbirth forever remained a pure, intact Virgin." (Zwingli Opera, Corpus Reformatorum, Berlin, 1905, v. 1, p. 424)

"I believe that He [Jesus] was made man, joining the human nature with the divine in one person; being conceived by the singular operation of the Holy Ghost, and born of the blessed Virgin Mary, who, as well after as before she brought Him forth, continued a pure and unspotted virgin." (Letter to a Roman Catholic)

Calvin, Luther, Zwingli, and Wesley were simply maintaining the long-standing traditional belief on the matter. Here are just a few witnesses:

St Gregory of Nyssa, On the Holy Generation of Christ, 5 (4th century):

"For if Joseph had taken her to be his wife, for the purpose of having children, why would she have wondered at the announcement of maternity, since she herself would have accepted becoming a mother according to the law of nature?"

“It was not the visible sun, but its invisible Creator who consecrated this day for us, when the Virgin Mother, fertile of womb and integral in her virginity, brought him forth, made visible for us, by whom, when he was invisible, she too was created. A Virgin conceiving, a Virgin bearing, a Virgin pregnant, a Virgin bringing forth, a Virgin perpetual. Why do you wonder at this, O man?”

"Without any hesitation we must abhor the error of Helvidius, who dared to assert that Christ's Mother, after His Birth, was carnally known by Joseph, and bore other children.

For, in the first place, this is derogatory to Christ's perfection: for as He is in His Godhead the Only-Begotten of the Father, being thus His Son in every respect perfect, so it was becoming that He should be the Only-begotten son of His Mother, as being her perfect offspring.

“Secondly, this error is an insult to the Holy Ghost, whose "shrine" was the virginal womb, wherein He had formed the flesh of Christ: wherefore it was unbecoming that it should be desecrated by intercourse with man.

“Thirdly, this is derogatory to the dignity and holiness of God's Mother: for thus she would seem to be most ungrateful, were she not content with such a Son; and were she, of her own accord, by carnal intercourse to forfeit that virginity which had been miraculously preserved in her.

“Fourthly, it would be tantamount to an imputation of extreme presumption in Joseph, to assume that he attempted to violate her whom by the angel's revelation he knew to have conceived by the Holy Ghost.

“We must therefore simply assert that the Mother of God, as she was a virgin in conceiving Him and a virgin in giving Him birth, did she remain a virgin ever afterwards."

Of course, most Christians today still believe in the perpetual virginity of Mary (think Catholics and Orthodox). The practice of most Protestants today of denying the perpetual virginity of Mary is a fairly recent innovation – a peculiar historical aberration, particularly since certain Protestants, such as evangelicals, would consider themselves to be conservative Christians – that can't even find historical precedent among the primary magisterial Reformers; for that, one can only look to a hand-full of 4th century teachers who were otherwise universally rejected as heretics.

Catholics, on the other hand, have maintained the 2000 year tradition that our blessed and holy mother Mary was indeed not only a virgin before Jesus' birth but also perpetually a virgin thereafter.